Prince Charles dressed as a countryman 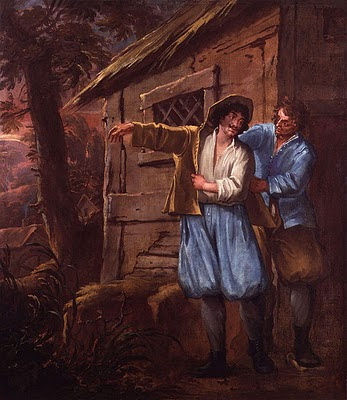 Just found this picture. It's not exactly contemporary but probably painted not long after the event. It's one of a series painted by the artist Isaac Fuller and depicts Charles II during his flight from the Battle of Worcester in 1650. He's just putting on a disguise and all the clothes show exactly how a common workman would have dressed. There is also a written description of his clothes, so we know he's wearing a hat borrowed from a miller: "greasy old hat with the brim turned up, no lining or band". Breeches are coarse and threadbare "even to the threads being worn white", the doublet is an old sweaty doeskin one with a high waist and tabs. His shirt was old, "patched at kneck and cuffs made of the coarsest hemp". The stockings are old green ones worn and darned at the knees and cut off at the foot and heel. His footwear is a pair of long boots. 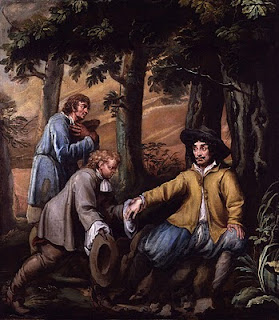 In the second picture he is attended by two obsequious looking individuals in patched coats. Are they creepy enough I wonder to not mention that their future king has forgotten to button his fly?
Posted by The Vicar at 09:26