A Boy's Doublet in Abingdon

I've been meaning to write about this doublet for sometime, but it's taken me a while to gather any useful information. The pictures were helpfully supplied by Eluned Hallas of the Oxford Preservation Trust and the bulk of the text is cribbed from a book excitingly entitled 'Everyday Objects: Medieval and Early Modern Material Culture and its Meanings', edited by T Hamling and C Richardson.
This is a rare survival of a common person's doublet from just before our period that provides a wealth of useful evidence about the cloth and construction of a doublet from the early 17th century. 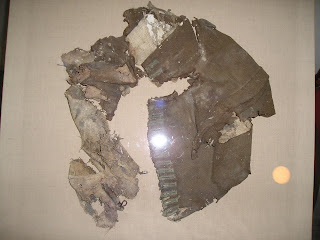 The Abingdon doublet was found in 1994 under the attic floorboards of 26a East St Helen's St Abingdon. It's crumpled and in pieces but there is still enough remaining that we can use as evidence of how common people's clothes were made, including the internal construction and the fabrics used. The size of the garment indicates that it was worn by a boy of about four or five years of age, and the quality of the fabric leads us to think that he came from a reasonably well to do family.
What remains is the collar, most of the left side, all of the left armhole and the top section of the left sleeve, including the wing and part of the back.  There are also 4 remaining thread wrapped buttons and two metal loops attached to the lower edge of the back of the doublet, presumably for attaching to breeches. The two side seams are placed towards the back, the back is cut in one and the collar is cut separately. The cut is simple with deep armholes allowing ease of movement. There are no tabs below the waist. There's not enough sleeve left for a proper analysis, so there is no way to work out the length, but they do seem to have been cut in one piece rather than the more fashionable two. 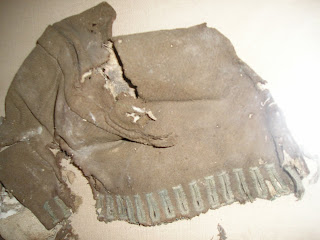 As the doublet is in a fragmentary condition, it's possible to see the construction. Each piece of top fabric was mounted onto the interlining and tacked in place before the fabric was stitched together. Extra stiffening was used at the centre front as were small pieces of linen at the top of the sleeve head. The doublet was also fully lined. The collar is stiffened with thick paper or card, which indicates that they didn't generally wash doublets. The left side has 18 buttonholes worked closely together.
The doublet is made from brown wool on top, a 2.2 twill with 10 warps and wefts per 10mm and a napped surface, a plain weave linen interlining with 10 warps and 12 wefts per 10mm and an irregular twill union cloth lining, the kind of fabric known as fustian, with 14 linen warps and 10 wool wefts per 10mm. Although the wool is now brown in colour, analysis has suggested that is was originally dyed blue. I'm not sure how thick or thin this makes it, but the article writer seems to think it was made from broadcloth, possibly woven in the Abingdon area.

Detail on the left of the buttons and buttonholes. All pictures thanks to the Oxford Preservation Trust.
Janet Arnold dated the doublet to 1625-30 which places it before our period, but not so far back that we can't at least use it as a basis for our clothes. 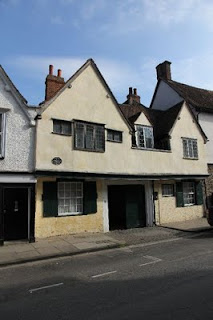 It is available to view by appointment in the house where it was found, 26a East St Helen Street, just around the corner from Abingdon museum. The house is well worth a visit, being an interesting example of a medieval hall house with some exceptional wall paintings on the first floor. 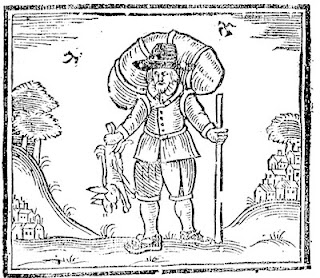 A belt in the 1640s was not worn to keep your breeches up. Generally if you had a pair that fitted, you didn’t need a belt, but as has been shown previously the standard fixing if you needed it was hooks and eyes, the hooks on your breeches attaching to the eyes on your coat or doublet. Braces are not known in our period either, the earliest surviving set are in Stockholm and date to 1650. The pedlar on the left in the woodcut has a belt around his waist and another to keep his pack on his shoulders. 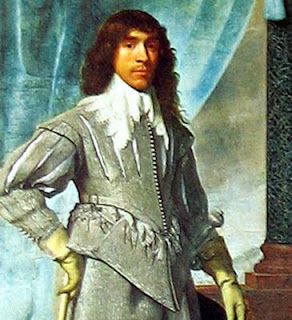 Belts were worn over the coat, around the waist and were used to carry keys or purses for example, but could also carry a hanger for a sword. They  were also worn with the better kind of doublet, often covered with the same fabric and fitted to the waistline. This fashion was dying out in the 1640s as the pointed waistline softened but would have been in evidence in the country and on less fashionable suits. Hooks or loops were sewn on top of the doublet with metal fittings to take a sword hanger.
The particular characteristic of 17th century belts is that they are narrow, usually no more that ¾” wide and the buckle is generally of the double loop or spectacle type with a keeper. There are no wide belts of the kind favoured in pirate films in evidence either in museums or images. Two particularly fine examples below are made by Karl Robinson.

Belt bags were worn by many and could be large or small. Woodcuts show rustic countrymen and pedlars with what we’d call a man bag in the 21st century. The image below is another Karl Robinson production and has several compartments to keep your necessities in. 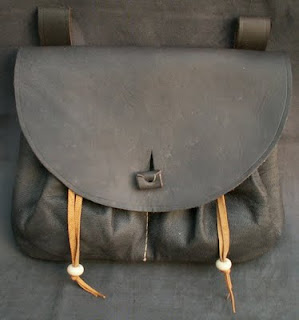