The Open Fly (or Codpiece) 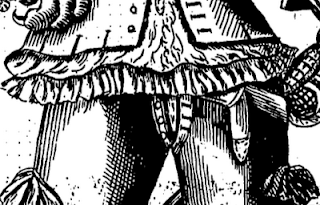 I was recently asked to comment on the clothes worn by a cartoon character in a 1640s satirical broadsheet. It was obvious when I looked closely that the breeches fly was open (see above) and I remembered seeing the same thing in a painting of Charles II. This got me thinking and wondering whether this was ridicule or a fashion statement. Often it is easy to apply modern standards where they don’t belong and when I looked into it, I found out some things I didn’t expect and ended up with more questions than answers.

The codpiece evolved as a flap to cover the front opening in a pair of breeches and during Tudor times turned into a quite exaggerated pouch that drew attention to the genital area. By the 1640s however the codpiece as an accessory had all but disappeared whilst it seems to have remained in the language to describe the buttoned flap that closed the opening; what we would now call a trouser fly, a term unrecorded before Victorian times.

In “Hocus Pocus, The Anatomy of Ledgerdemain” from 1638, the author puts this comment in the margin as part of a piece about the cup and ball. This is still familiar now as a confidence trick:
“ Some I have seen with their codpieces open, others play with a budget hanging before them"
A budget is a wallet or bag, and the quote relates to finding a place to hide a ball and make it disappear.

In Robert Herrick’s poem Hesperides from 1648, there is this entry:
“ If the servants search, they may descry In his wide Codpeece, (dinner being done) Two Napkins cram'd up, and a silver Spoone.”
Another example of the codpiece being used as a receptacle, though  neither reference make plain whether it is a pouch or just the breeches opening that is being referred to, they do show that the term was still current. 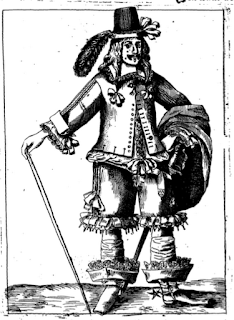 Several images from the 1640s show the codpiece being worn in a fashion that we would describe as “half mast”. In The English Antick, a satirical cartoon from 1646, amongst the list of his “anticks” number 17 says:
“His codpeece open and tied at the top with riband” 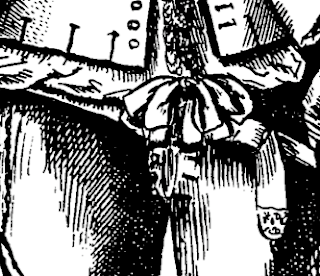 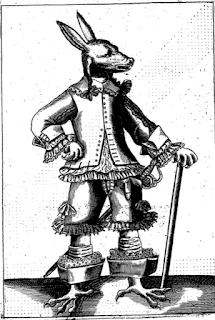 The Wolfe with Eagles Clawes,  a parliament scandal sheet aimed against Prince Rupert from 1647 shows a similar character, though this time obviously a fantasy figure, with his codpiece unbuttoned. The close up is at the top of this piece. 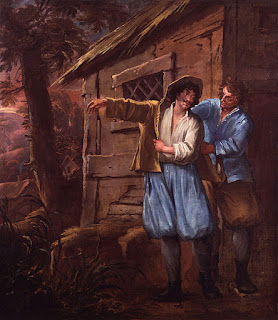 Isaac Fuller painted five pictures that detailed Charles II’s adventures after the royalist loss at the Battle of Worcester. The paintings were made after the Restoration and show Charles in disguise. 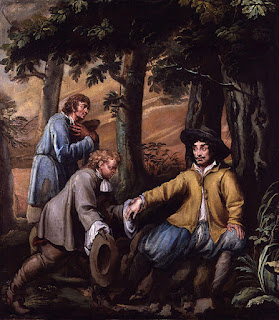 In the first painting Charles is putting on his disguise and his companion Richard Penderel has his breeches open, whilst in one of the later illustrations, Penderel’s codpiece is buttoned and Charles displays the lower part of his shirt linen through an open codpiece. 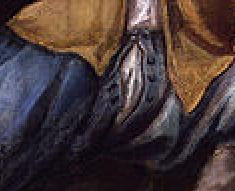 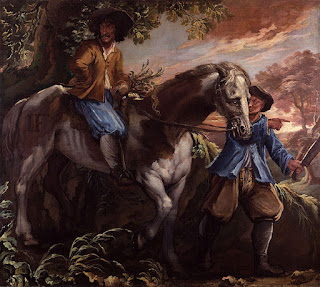 There are several possibilities why a codpiece might be illustrated as open, but as a custom, the reasons are lost in the mists of time.
Maybe it was a hangover from the codpiece as an extra pouch in front of the breech opening, once the pouch disappeared men continued with not fastening the opening. Perhaps it evolved as a fashion that aped the uncouth commoner for whom the need to close the vent was either unimportant or a sign of  laziness? Or was the codpiece just used as an extra pocket as described in the references above and as such left open for easy access?
Answers please!!