Shirt in the Manchester City Galleries of Costume 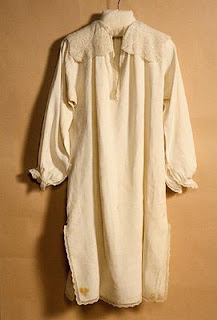 There aren't many shirts left in existence from our period, let alone relatively basic ones, but this is an exception. It's kept in the Galleries of Costume in Manchester. Not sure how it survived, but reading the description the owner who brought it to the museum didn't know what they had! Stuart Peachey has published a pattern based on this shirt in his book "Common Soldier's Clothing of the Civil Wars". It shows how a shirt could be cut from a standard 10 foot length of linen.
This is the description from the Museum:
"Long full shirt in white linen. Cut in a T-shape: 2 large panels with side seams; separate sleeves set into the body and forming small underarm gussets. Sleeves and body drawn into bands at cuffs and neck with very fine, close smocking. Very fine French knot embroidery worked along upper shoulder seams. Openings at cf, side vents and cuffs, all edged with narrow bobbin lace (distressed). End of each opening marked by a knot-motif in plaited applique braid. Other seams very finely double over-stitched. Falling-collar attached at neck of fine Flemish (or Northern European) bobbin lace (4 inches deep) with shallow scallops at edge and a close formal geometric design. Embroidery is of a higher quality than the lace, and body of shirt almost certainly earlier, perhaps mid 16th century, with later lace collar added.
Purchased at auction in 1995 with 50% aid from V&A/MLA purchase fund. The vendor brought a pair of stays to be valued for sale, and this shirt was used as wrapping or a cover which is how it had survived."
Thanks to the Manchester City Galleries for permission to reproduce this image.
Posted by The Vicar at 07:32 No comments: 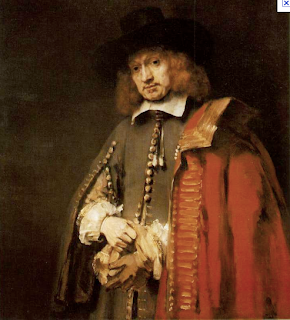 On the face of it, a soldier’s coat is exactly that, a coat or overgarment. However in many pictures it is obvious that another layer was used. Although 17th century folk were a hardy bunch and extra layers may have been looked on as a luxury item, this was a rather cold time to be in England and the summers of the early 1640s were particularly wet ones too. Picture on the right portrait of Jan Six by Rembrandt. 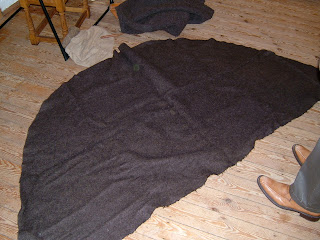 The civilian answer to this was the cloak, cut out of a circle or part of circle of wool. The simplest form was just that. An example came to light in an excavation at Dungiven Bog  in Ireland, amongst other early 17th century clothes found is a semi circle of wool cloth designed to be worn over the shoulders. This reproduction was made by Gilly Morley. 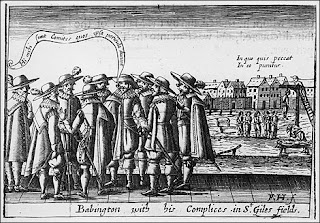 A more upmarket cloak had a square collar that could stand up when the cloak was fastened and lay flat down the back when worn open. Engravings of crowds from this period show that this type of cloak was a very common garment in the city during the winter.

Many soldiers, particularly those impressed from the towns and cities, would probably have one of these cloaks. They were practical and could act as a blanket  at night. It is thought that tents were not used on campaign and something to cover yourself up with if you hadn’t found shelter would be a sensible thing to own. Maybe blankets were worn as cloaks too, though after a few months in the field it would be difficult to tell whether it had started out as a cloak or a blanket. These pictures, the one on the left by Hollar, and the other, below of a French army besieging a town in Flanders from the 1650s show this clearly. 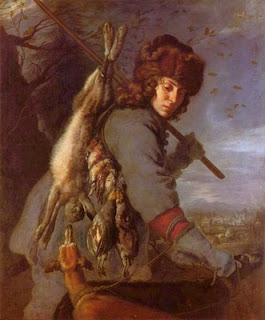 Common working men also had a basic long loose fitting coat, bit like an old fashioned mackintosh, commonly described as a gaberdine or just called a coat. This picture of a huntsman by Dutch artist Joachin van Sandrart 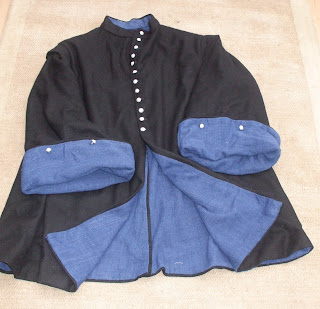 Also worn by more affluent civilians and higher ranking soldiers was a larger more complex coat, known as a cassock. There were many variants and several different names and spellings. It seems to have developed from an overdoublet and was in our period generally thigh length with large sleeves and turnback cuffs often displaying a facing material of contrasting colour.  This recent example was made by Barbara Robinson. 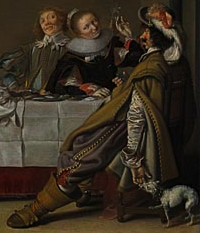 A popular item with reenactors, although it doesn’t appear very often in illustrations is a cassock with sides and sleeves that can be open or buttoned up, giving a garment that can be worn in several styles, cloak, coat or coat with hanging sleeves. It doesn’t appear in any documents, although there is a reference to coats being made for the Earl of Essex’s guards that specify 180 buttons per coat, which was probably for this type of coat.  Nice example here in a detail from a painting by Hendrik Pot. 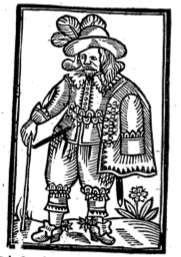 Sleeved cloaks were also worn, a kind of cross between a coat and a cassock that were worn in a casual ‘off the shoulder’ fashion with the sleeves being no more than decoration. This rather rakish individual appears in several Roxborough ballads.


As Tony Barton wrote in 'True Relation': You might attempt reconstruction of any of these garments, depending on your chosen role. A pressed labourer would not possess a buttoned cassock, but he might have a simple overcoat of grey with a few cloth buttons. An old buttoned jerkin might be appropriate for a veteran soldier; a bourjeois would wear a cloak, sleeved or not, the officers have free choice-gold-laced sleeved cloaks, buttoned cassocks, or whatever.
If you want to look really low life, take an old grey army blanket, tow it behind the car for a few miles, bury it in the garden until the spring, dig it up and wear it. You'll look lovely.
Posted by The Vicar at 14:46 No comments: 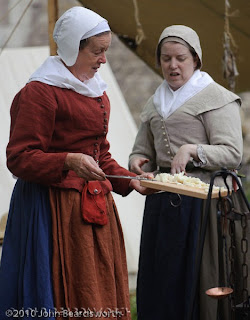 Women of almost every degree in society wore an apron indoors and outdoors. It was a simple functional garment that was sufficiently common to become proverbial: ‘tied to her apron strings’ for example. It protected the more expensive, less easily washed and dried, petticote (or skirt) and also provided a quick, always available cloth on which to wipe your hands. Photo on the right by John Beardsworth.
Status in society seems to have had no bearing on whether you wore one, except in the quality of the aprons worn. Inventories and wills from relatively lowly households suggest that most women had one or more of probably three grades of apron, suited to the task and situation: old ones for messy jobs,  (scrub the floor, pick up hot pots, gather eggs etc.), a newer one for normal wear (going to market, meeting the neighbours), and a ‘Holy day’ apron which could have been quite elaborately decorated – the ‘Sunday best’. 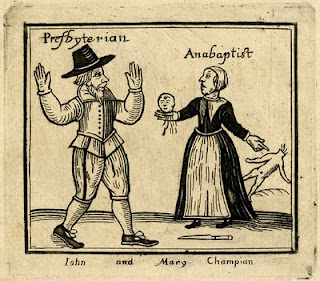 The apron was normally linen, wool does not seem to have been used. Linen is easy to wash and dry, whereas wool is not, especially in cold, wet weather. Mary Champian (picture left) will find it much easier to get the blood out of her apron than her petticote. A greasy apron is a potential deathtrap around open fires, so frequent washing was important. For the same reason the speed with which the apron can be torn off if it starts to smoulder/burn is important, so complicated fixings are probably not authentic. Simple apron strings tied behind the back, or even just a couple of brass pins to the petticote could be used (but remember you may need to remove it quickly). 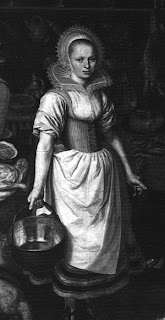 The apron itself should be a linen rectangle wide and long enough to cover most of the front of the petticote. It should be hemmed on all sides, and is easier to clean and press if it will lie as a flat rectangle, so one with permanent gathers at the top is likely to have been considered a nuisance. The apron will lie better if the strings are attached an inch or so in from the edge rather than directly to the corners. It is possible that some of the ‘gathered’ aprons seen particularly in Dutch paintings (see right) reflect an apron-string passing through the upper hem rather like a curtain on a cord. Remember that more material than was absolutely needed served no useful purpose, but pushed up the cost.
Linen in the seventeenth century could be bleached white with exposure to the sun but would never become as white as that achieved using modern detergents. It’s much safer to pick an off white shade, especially if you intend to portray a common person. 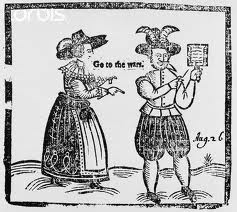 Holy day aprons were probably normally decorated in some way appropriate to your social station. Simple applied decoration inside the edge is possible; in other cases a grid pattern of horizontal and vertical ribbons or tapes (or perhaps even something woven into the fabric); drawn thread work may also have been used. This was for special occasions so the apron was carefully preserved and protected. It is unlikely that such aprons would have been used around a soldier's camp except for church service or a wedding. 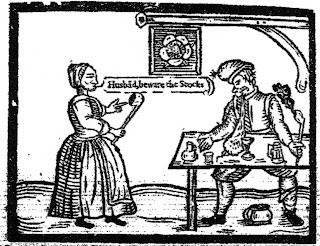 All women wore aprons as part of normal everyday daytime clothing.
Wealthier women wore an apron, although theirs were of finer quality.
They probably had more than one apron.
The simplest apron is a flat rectangle of linen, plainly hemmed, covering the front of your petticoats but not wrapping round the sides, and reaching from the waist to just above the hem of the petticoat.
Decoration can be added according to your station in life (fancy stitching, drawn thread work, hem-stitching, etc.).
Finer materials and decoration would be for women of higher status gathering at the waist would use more fabric and therefore cost more, so would be another indication of wealth
Posted by The Vicar at 13:45 No comments: