"A cap of a type formerly worn in Spain for hunting, having a spherical crown and (freq. fur lined) flaps able to be drawn down to protect the ears and neck"
However as they were issued items it seems likely that they were a cap particular to the armies and there are  images of soldiers wearing caps that could just fit the bill, with triangular panels making the crown, some with peaks but all having a band around the crown that could be folded flaps This seems to have been a very practical hat for a soldier, not likely to be blown off in the wind and with an added feature of providing extra protection in the cold. 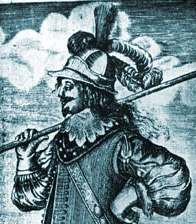 In this image, Colonel Thomas Lunsford is wearing a cap with a peak and a low rounded front, very much the classic reenactor's montero. Notice how thin the band is that goes around the cap. 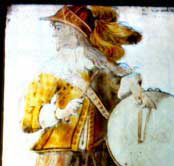 The next two images are very similar, one after Bosse is a French engraving and the second from Farndon Church window in Cheshire of drummers wearing the same kind of cap, this time with a band that comes to a point, and either braid or piped seams as decoration, topped off with the ubiquitous feathers. 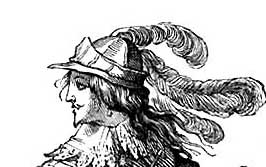 The last two are also similar, one is a Hollar engraving, the other by Abraham Bosse, entitled Envy, both show a peakless cap with piped seams or maybe braided decoration to the crown, which is made of more panels this time, maybe 12 or so and a folded band that comes to a point in front like the drummer's one. The right hand image also shows the folding of the band  though I suspect, having made a few, that the artist doesn't quite understand how they work. The detail does show though that the band is butt stitched together at the front. Both have a button on the top that covers the tricky part of the crown where the seams meet. 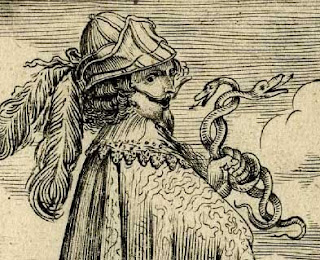 Here are a couple of photos of a cap that I made with piped seams and an unbleached linen lining, an amalgam of the last two original pictures and the drummer's montero. In the second shot, the band has been unfolded to show how the cap could provide protection rather like a balaclava helmet. 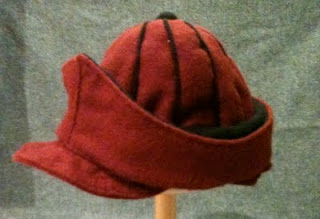 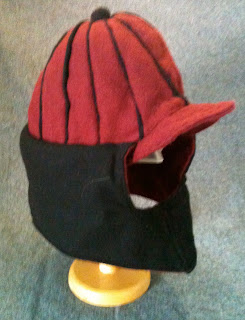 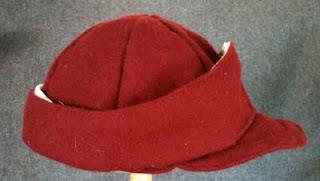 And now a third example, my best take on the peakless Envy montero. 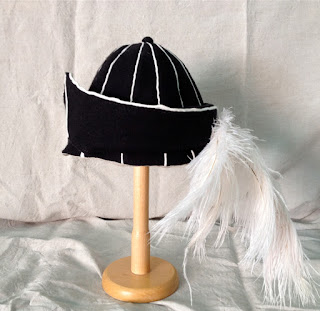 The Soldier's coat as a top layer was generally loose fitting but as many were issued rather than made to fit, this is not a strict historical necessity! They were made of woolen broadcloth and lined with linen or the light wool fabric known in the 1640s as cotton. The colour is optional but should be of an achievable colour using 17th century dyes and appropriate to your role and regiment, remembering that coat colours changed throughout the war and often faded after prolonged wear, sometimes into a completely different colour (see article on coats and uniformity).

Photo on the right from Chris Thomas 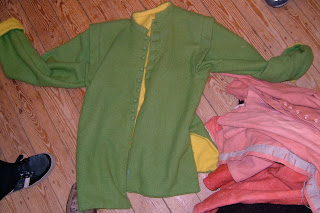 The general style is high waisted with a standing collar though there were other varieties and civillian coats were also worn in the ranks at times. It would have closed front sleeve seams though the back seam could be left open for a few inches to provide a turnback. Coats were almost always closed with buttons, closely spaced down the front to run from collar to waist. 10 buttons is a minimum. More could be worn and the coat would be buttoned to the neck. Refer to the buttons article for the correct types for the period. This photo is a nice example of a square cut soldier's coat by Gilly Morley with cloth buttons. Pic from Tom Aldwinckle 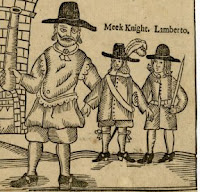 In this cartoon about Richard Cromwell, called The Meek Knight, the soldier on the right wears a shapeless soldier's coat of a typical style.

Here is a detail from The Vindication of Christmas. The soldier pictured wears what appears to be a more shaped, perhaps almost civilian style coat. Notice also the nice latchet shoes and the triangular darts in his hose.
There are also several schools of thought as to exactly how the coats were cut. One conjecture is that they were parcelled out to unskilled tailors and a pattern was developed to cater for a low level of skill and equipment that involved a squared off pattern that could be torn from the cloth rather than cut. I guess all kinds of patterns were used, the slightly tailored one being favorite, but the square cut, quick fix pattern has obvious advantages.
Posted by The Vicar at 06:52 4 comments:

Coats & Uniformity (or not as the case may be!) 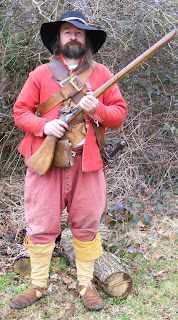 Selecting what coat to wear in reenactment is much like choosing the length of a piece of string.
There are references to coats being issued to soldiers. For instance Oxford regiments were given coats, breeches and montero caps in 1643, so if you were an Oxford royalist in July of that year you would wear a nice bright red or blue coat, though not necessarily a well fitting one as uniform issue clothes have never been made to fit. 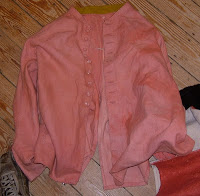 The red coats would fade rapidly on campaign, the blue ones less so but maybe after only a month or so in the field they would probably be considerably the worse for wear, so the same Oxford royalist half way through the year would wear a coat of a shabby quality that may take several years of reenacting to achieve. This image, by Tom Aldwinckle shows a red madder dyed soldier's coat after a few months in the sun. You can see that the original bright red (bottom corner) has faded in patches to a pinky hue. Coat by Gilly Morley
Hampden's regiment in the parliament army started in1642 with issued green coats with yellow linings. By spring of the following year the coats were faded and patched, and as the yellow in the green dye would fade faster than the blue, they would have looked more like a blue coated regiment. Up until the autumn when a new issue of grey or red coats was made the coats would possibly have been supplemented by some civilian doublets. By 1644, having gone through several more changes they would have been in red coats and breeches! Quite a range to choose from should you want to represent this regiment, but not uncommon in long lived units throughout the war.
(info from Common Soldiers Clothing by Stuart Peachey and Alan Turton) 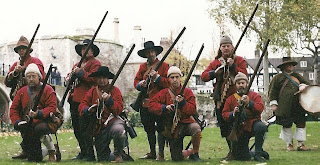 Issue coats would also we think be made in batches rather than job lots. A tailor contracted to make a thousand coats for an army would have to subcontract and thus even a bulk order such as for the Oxford army or the army that went to Ireland would be made up of a wide spectrum of cuts and colours as seperate bolts of cloth would be used by different tailors who probably also had their own favorite pattern.
If you were part of a militia or a trayned band you may have had an issue of coats or you may just have worn your own clothes. In this case your top layer would either be a plain Soldier's coat or perhaps a civillian tailored doublet.
Thus the big problem is that civil war soldiers were not uniformed or regimented in their dress in a way that modern troops are, and as I have described, the coats varied widely even from season to season, so for a particular company or group in reenactment you have to decide the period you are presenting and how to portray the effect that campaigning would have had on the clothes whilst presenting some kind of unified whole. 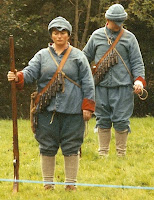 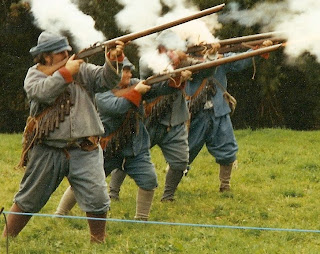 The pictures here show one solution. The soldiers were issued with authentically dyed uniforms that have faded over time. The blue ones become almost grey in hue, whilst red becomes pale also. The fading is uneven in places, shoulders and sleeve tops for instance losing colour more quickly than the underarms. There are batches of uniforms evident here, some coats being newer are less faded, producing a parti-coloured effect that may replicate the Oxford army in issued coats, having been in the field for a few months.

Photos courtesy of Chris Thomas
Posted by The Vicar at 08:37 No comments:

Hose or Stockings? You choose!

Hose as worn in the Civil War period were made either by knitting woolen or silk thread or by cutting and sewing fabric. There are records of both kinds being provided to the troops who went to Ireland in 1641 so are probably ok for Civil War purposes.

The knitted varieties vary from quite coarse for common soldiers and peasants to very fine for officers and gentlemen as the smaller the stitch, the longer it takes to make. For a common soldier it should be possible to see individual stitches from a few feet distance. Here's a link to a site with a downloadable pattern should you wish to have a go at making your own. Pattern and image from Chris Laning.


They should be generally made from natural coloured wool, although there would have been some dyed stockings available too. The style most often pictured has a triangular gusset from the calf to the ankle on the sides which seem to copy the cloth cut version and is long enough to reach above the knee. Expensive, officer class hose could be knitted from silk. 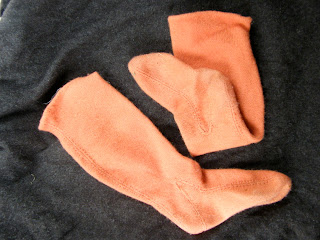 Cloth hose can be made from light wool or linen fabric and are cut to a pattern on the bias of the cloth (diagonally) so that this would give the stocking some stretch. Again pictures show some dyed and some undyed pairs of hose. Both types would be fastened with ties or tapes. This pair was made by Gilly Morley in coarse woollen fabric and dyed with madder.

There is quite a lot of evidence that shows that it was quite common to wear more than one pair of hose. There is no real documentary evidence to suggest why this was so, but it would seem to be a practical idea to give extra protection. Mostly the outer pair seem to be self supporting to at least two thirds of the way up the shin. The second pair could be knitted, cloth or leather, the last kind providing real protection and possibly acting as a poor man’s bucket top boot. In fact there is a pair in Huntingdon Museum attributed to Oliver Cromwell, so not necessarily just for the poor. The main thing to remember should you decide to wear an outer pair is that they must be self supporting and should not under any circumstances be rolled down. This is a modern idea.
Image left from Gambling Scene at an Inn by David Teniers, late 1640, right detail from Un Sculptur dans son Atelier by Abraham Bosse 1642
Posted by The Vicar at 05:41 No comments: