What you will need to kit yourself out as a civil war soldier, from the ground up with some pictures of some of the best examples from traders.

Number one, a good pair of shoes 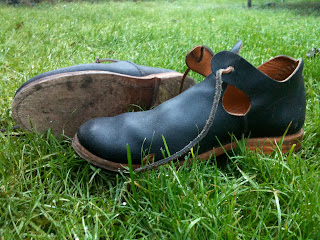 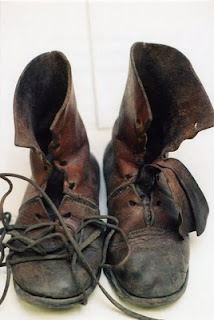 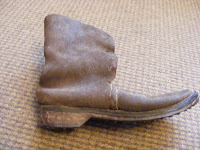 Pay the most you can afford, you really won't regret it, in this case it's no economy to save money. You really do get what you pay for. what you want is either a pair of latchets or some long shoes (also known as startups by reenactors). Latchets were by far the more common type of footwear, but long shoes were also worn we think by soldiers who may have had an agricultural background. They are generally more protective of your ankles. 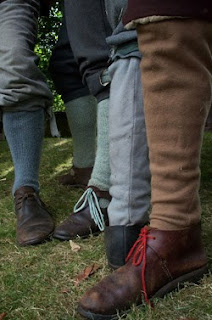 A nice pair of woollen, knitted or sewn stockings, tied above the calf with linen or fabric ribbons. They should be of a dull natural wool colour, brown or grey. Finer linen sewn hose can also be worn as an extra or an alternative if you want. The outer pair may slouch down to reveal the inner stockings. This seems to have been a common fashion. 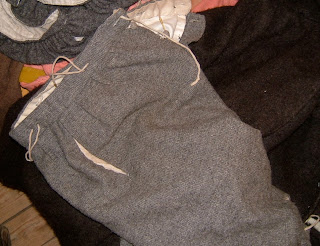 A pair of wool breeches, reaching below the knee, with a narrow waistband, authentic buttons (see the haberdashery page) to secure the fly and lined with linen. These should also be of a sadd or natural colour, unless your chosen regiment specifies differently. Most soldiers provided their own, but there were a few instances of breeches being issued in a particular colour. Check before buying. 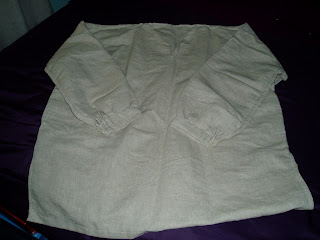 A shirt made of unbleached linen. It should be cut square and long, front and back each made of a single piece of fabric, gathered into a narrow neckband.
The sleeves are cut square and gathered to a cuff with square gussets under the arms. There may also be triangular gussets where the collar meets the shoulder seam.
At the front there is a simple straight hemmed front opening, secured by a pair of ties. The shirt should not have any more than a small standing collar and a falling band may be tacked on. For common soldiers the band should be just large enough to cover the standing collar on the coat. 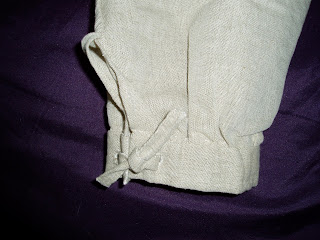 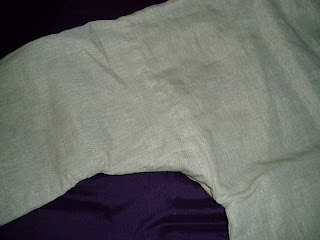