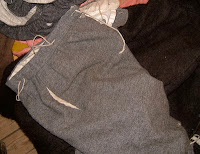 The breeches worn in the civil war were generally of a different colour of to that of the coat. Unless you were in the Oxford army, breeches were not issued as part of the uniform. One possible exception would have been Trayned Bands who would provide their own clothes so may or may not have coat and breeches to match. Most troops would wear what was termed "sadd" coloured breeches, dull natural hues such as grey or mud brown. 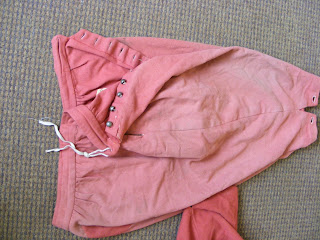 The cut of 1640s breeches was full, though this was always down to how much you could afford to spend on fabric. Issue breeches would have probably been less full to cut down on material. They were of wool broadcloth, high waisted and reached to just below the knee. The waist band was narrow and the fly fastened with appropriate buttons. The pair on the right are fastened with a lace at the waist, though a button can be used too. The cloth of the breeches would be gathered, hemmed and stitched to the edge of a finished waistband, rather than turning the band over the gathered fabric and stitching down what becomes something like a wool sausage. An opening can be left in the rear of the waistband to accommodate a lace that can be used to adjust the fit of the garment. 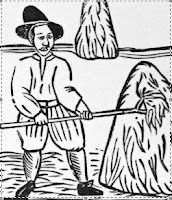 The legs are either left open (unconfined), which was the latest fashion, or gathered and stitched to another band in the same fashion as the waistband, which could be secured with buttons or ties threaded through eyelet holes at either side of the opening. There is also some picture evidence of breeches legs gathered below the knee with no fastening at all. A ribbon or lace passing through and gathering the band is not period and is a modern reenactor-ism as far as we can tell. Breeches are generally lined throughout with natural linen to make them more comfy.
Pockets were inserted into the side seams and could be quite large with several compartments. They can be made of linen or leather.

In this period neither belts nor braces were used to keep your trousers up. Authentic methods of keeping your dignity include: buying a pair that fit, using hooks & eyes or string loops attached to the breeches that fasten to your coat. The grey pair by Gilly Morley above have strings, whilst Mr Marriott on the right has hooks that engage with the eyes in his doublet to hold them up.
Photos from Tom Aldwinckle and Chris Thomas. Detail on the right from A Letter To Mr Marriott, pamphlet from 1652
Posted by The Vicar at 05:19