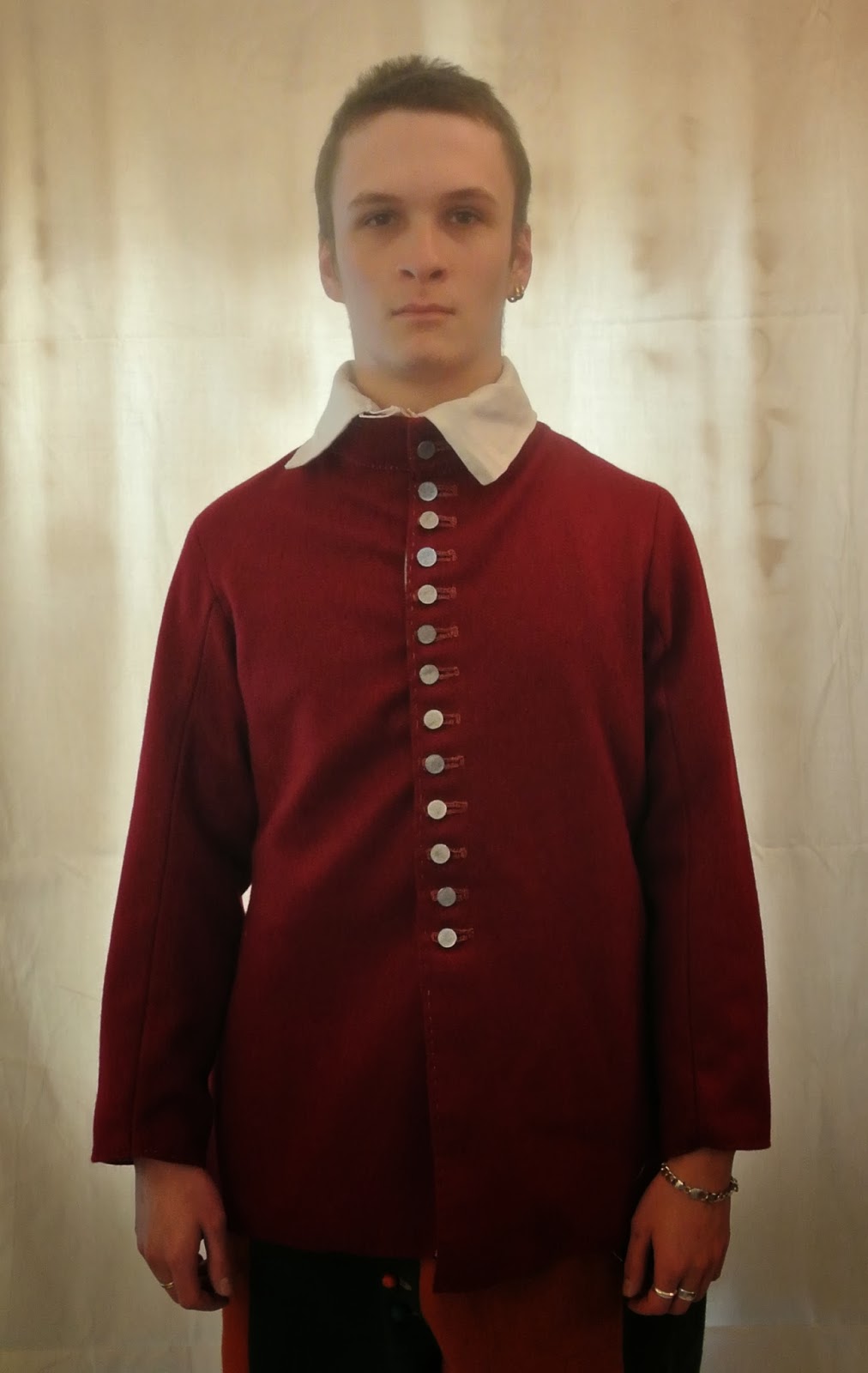 Last year I was lucky enough to visit the store rooms of Colchester Castle Museum and examine a coat in their collection. The coat was found in a chimney of a house in Maldon in Essex in the 1940s and although not precisely dated it is thought to be late 17th century in origin from the style of the cut. Whilst I wrote a report and took photos I was asked by the Museum staff not to blog my thoughts as Kate Gill had been given the job of conserving the coat and producing a report and a replica of the coat to be displayed in the museum. If you are interested, follow this link to Kate's website with some photos of the coat and replica. I am convinced that even if the coat isn't proveably from the 1640s, all the sewing techniques and the pattern used are spot on for a coat from the Civil War period.

So, in lieu of a report I have made my own coat using the construction methods of the original, but reducing the length and changing a few other small details to better represent the style and cut of soldiers coats from the English Civil War.

The original coat is made from closely woven wool, felted so that when you cut the fabric it will keep the edge without fraying and lined with a coarse linen fabric. Luckily there are still suppliers who can provide a decent, though not exact approximation to seventeenth century broadcloth. All the edges of the coat are left raw, the lining is turned under and the two layers sewn together with running or fore stitch. 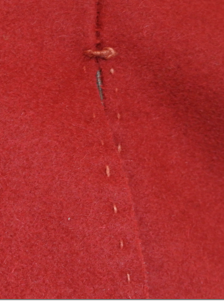 It's not a modern method of tailoring, but it is seen in several 18th century coats as well as the Maldon coat and still used for Guardsmen's coats in the English Army. What is does do is make for cleaner lines and more accurate cutting as well as using less cloth because you don't need to add seam allowances and thus you can butt the pattern pieces together on the cloth when you are cutting out. The threads used to sew the original coat were a contrasting colour to the fabric used so I've used a brighter coloured linen thread, (dyed with rose madder from Mulberry Dyer) which makes the stitches visible, but also I believe more authentic.

In the photo above you can also see a worked bar of the same thread at the lower end of the side seam. There are three of these on the coat, one at each side and one at the back to reinforce the end of the seams and prevent ripping. 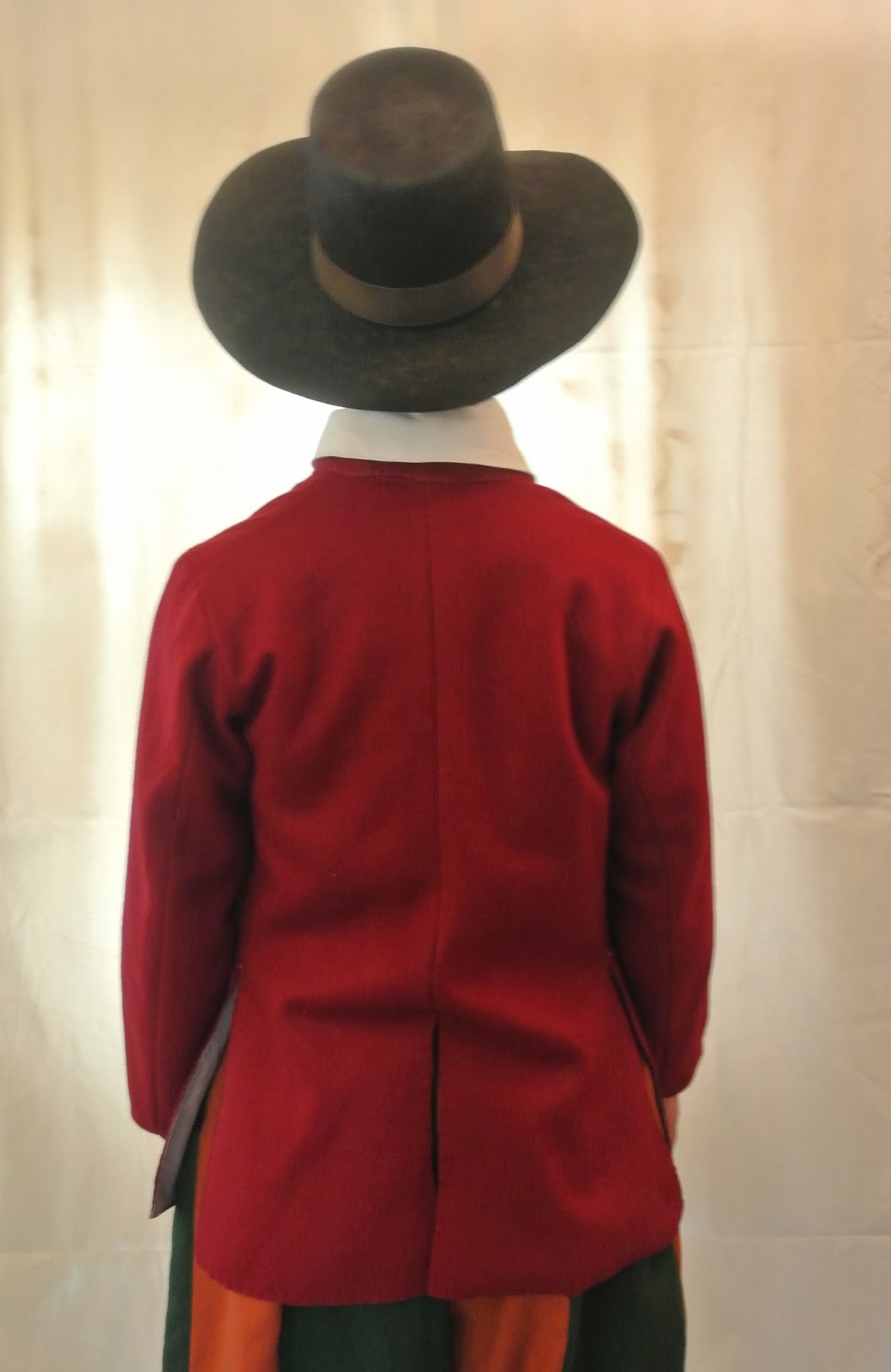 The cut of the coat is not exactly square, there is a noticeable waist and the coat flares out at the bottom. This copies the original but also mirrors coats that appear in woodcuts. The main body of the coat is in four pieces, the sleeves made from two pieces and slightly curved. I've not added cuffs or turn backs. Though the Maldon coat has cuffs, they are thought to be a later addition and a lot of soldier's coats have this kind of simple finishing to the sleeve. I also decided against shoulder wings, firstly because the original doesn't have them, but also because the woodcuts seem to indicate that wings only appear on coats that have turn-back cuffs.

The collar is a simple folded strip oversewn around the neck opening, the bottom edges again left raw. This is a common method in 18th century coats as well as the Maldon one, and makes perfect sense for the raw edges will not be subject to any wear. 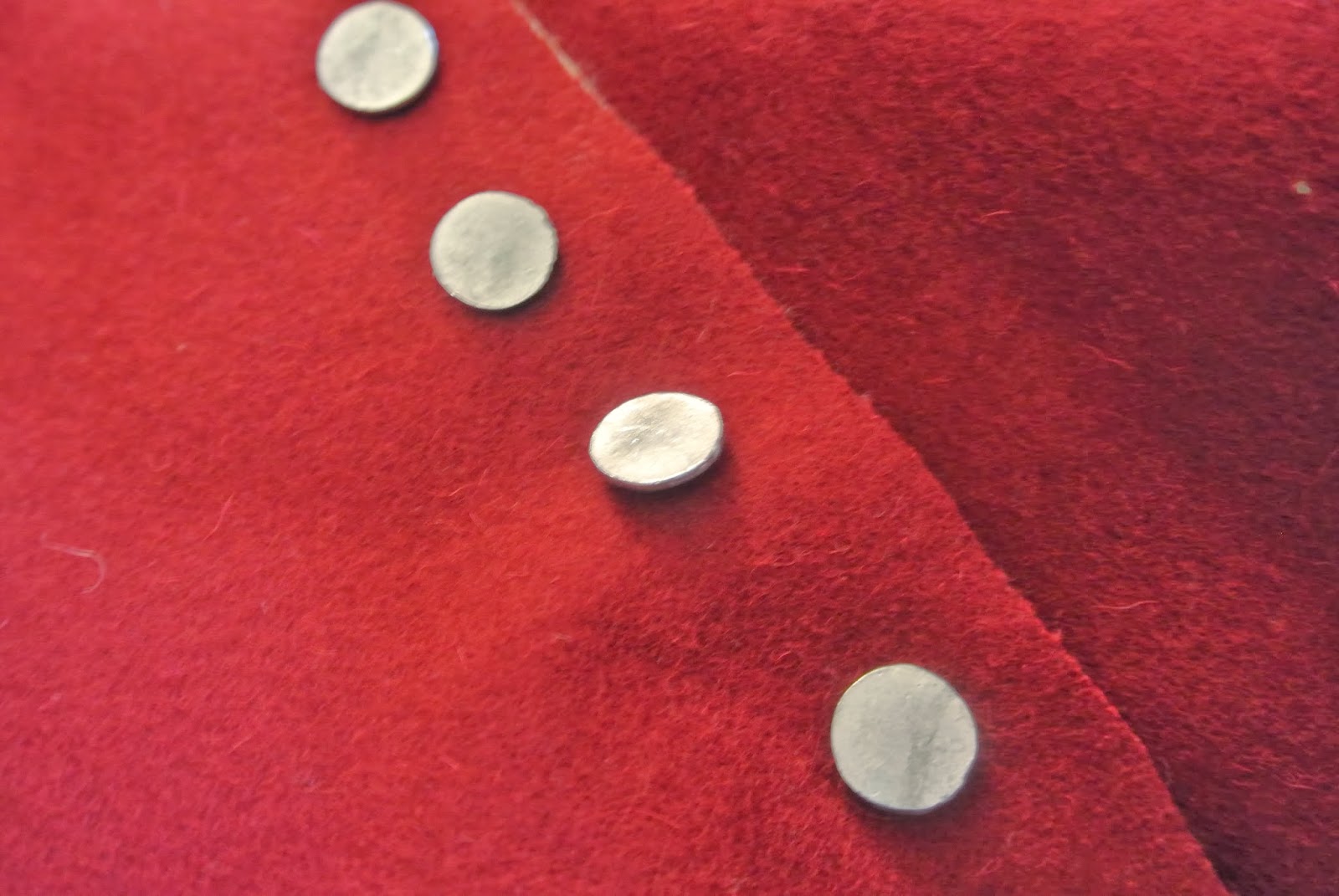 The buttons are flat pewter shanked ones. The Maldon coat has wooden cores covered with knotted threads (turk's head) but I decided to use the pewter ones mainly for speed, but this kind of button turns up occasionally in archeological digs from the period and makes logical sense if you are making many coats quickly for an army issue, like the coats made in Oxford or Nantwich in 1643 for instance. 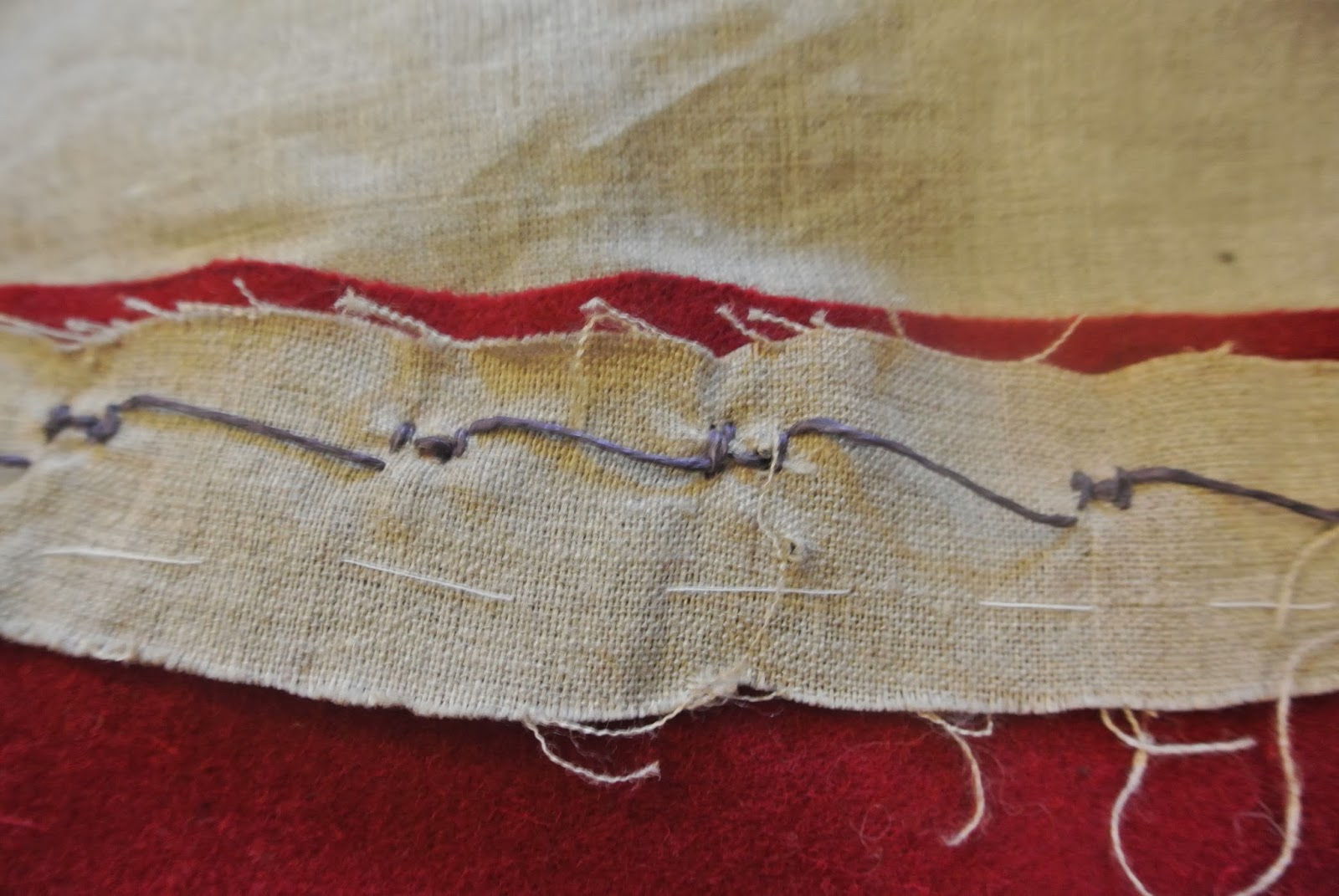 I secured the buttons by pushing the shank of each one through the outer wool layer and a strip of coarse canvas and then oversewing with a single thick linen thread. The museum one has a strip of linen behind the buttons to stiffen the front edge and also help secure the buttons. This ensures that each button sits nice and tight against the surface of the cloth and is quicker than sewing each one separately. You can also use a strip of leather if the shanks are big enough. 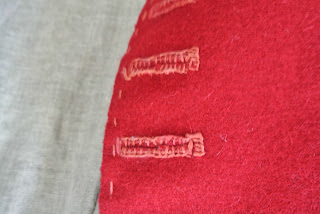 You will notice also that the buttonholes are quite open. Reassuringly the original buttonholes aren't anywhere near as fine as that on some posh doublets I've seen and making them more open means you spend about half the time you would normally on doing those annoying buttonholes! 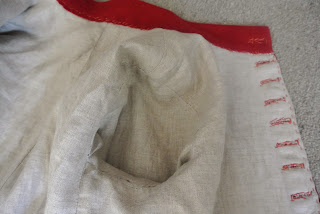 Here's a view of the inside, showing the lining and the inside of the collar and buttonholes. The buttonholes aren't pretty from this side, but I think that's quite authentic judging by some I've seen, (including the Maldon coat). I didn't secure the sleeve head of the lining to the shell of the coat, but this was an option in tailoring of the period. Next time I will experiment with sewing the sleeves in as separate items after I've sewn the body and lining together, tacking the seam allowance of the body of the lining to the outer around the armhole, before whipping in the sleeve lining.


So some surprises here for anyone used to modern methods. Everything is very logical. Though it's made using techniques that are counter-intuitive if you have a sewing machine, for hand sewers it all makes perfect sense. The raw edges were a surprise at first and the very simple technique of sewing together with running stitch rather than neat hemming seemed unusual, but it works. The worked bars to secure the seams are logical and the loose buttonholes together with the method of securing the buttons also result in a garment which is quick and relatively easy to make. All that remains to be seen is if it will stand up the the rigours of my son wearing it in the pike block. Watch this space!
Posted by The Vicar at 15:13