A New Pair of Breeches 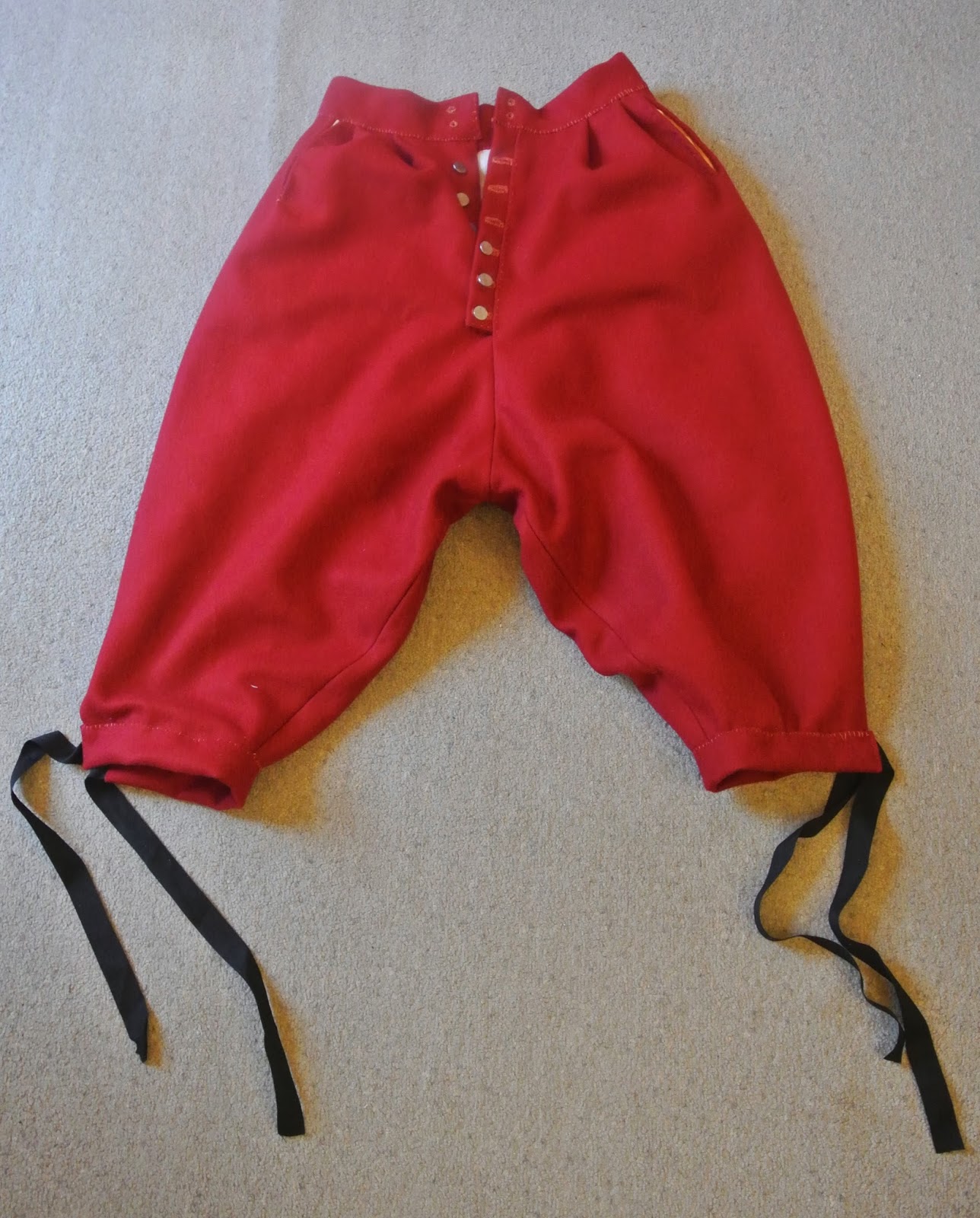 The Oxford Army in 1643 were issued with suits, to include breeches and coats. I've made the coat, now here are the breeches, also newly modelled. Although there were no breeches found with the Colchester Museum coat to inspire this garment, I did go recently to see a pair of breeches in the Victoria and Albert Museum Clothworker's Centre that form part of a woollen suit, circa 1625-35 and I have used some of the aspects of those original breeches to help me work out a pattern and method of construction. The suit is made in a wool serge material which is hemmed unlike the Colchester Coat, and my breeches are in broadcloth which will hold a cut edge, so I have taken aspects from both garments to create my breeches. My photo of the V&A breeches is below. you can also look at the catalogue description by following this link 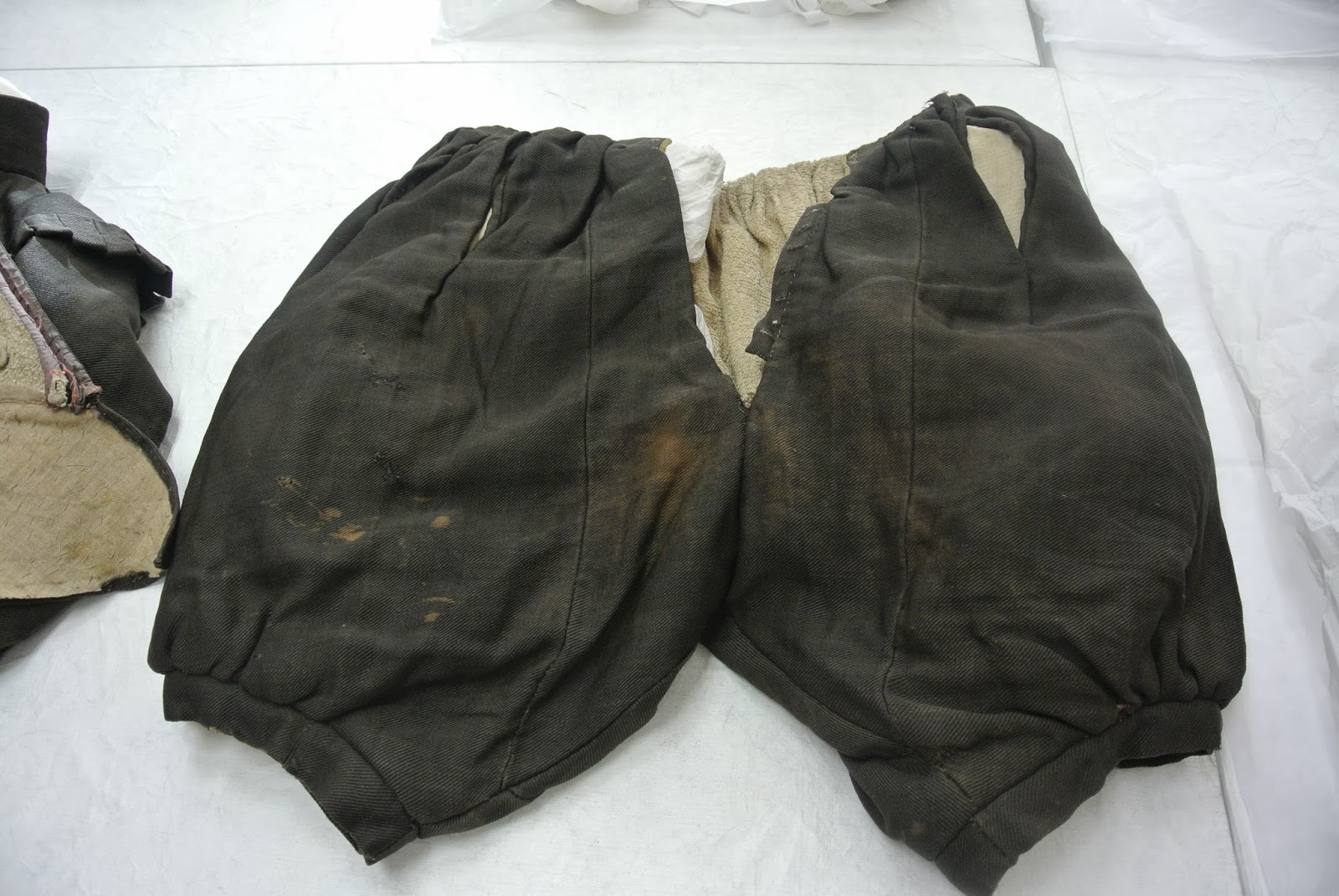 The serge breeches are actually made in 8 main pieces, my thought being that the original roll of fabric was too narrow to allow larger pieces of fabric. Luckily for me I had a nice roll of broadcloth so I could cut the main pieces out and make mine in four sections, which cuts down on the seams needed!

Once I had put the four pieces together in outer and linen lining, the next job was to insert the pockets. One thing that surprised me on examining the originals was that the pockets weren't inserted in the side seams, but had their own slits inserted. In fact the slits weren't actually finished off in any way, a worked bar holds the outside edges together at the bottom to stop ripping and the edges are just turned over and the pocket sewn in with running stitch. I tried to match this method with my pockets. The pocket lining in both cases in oilskin, or chamois leather. I've seen several references to suggest this was the case with breeches made for troops in the war. Here are the pockets; the lining in the V&A photo is missing, although there is one remaining liner out of the four pockets in the breeches. I've only inserted two pockets in mine, though it would be relatively easy to put in more even though the breeches are now finished. 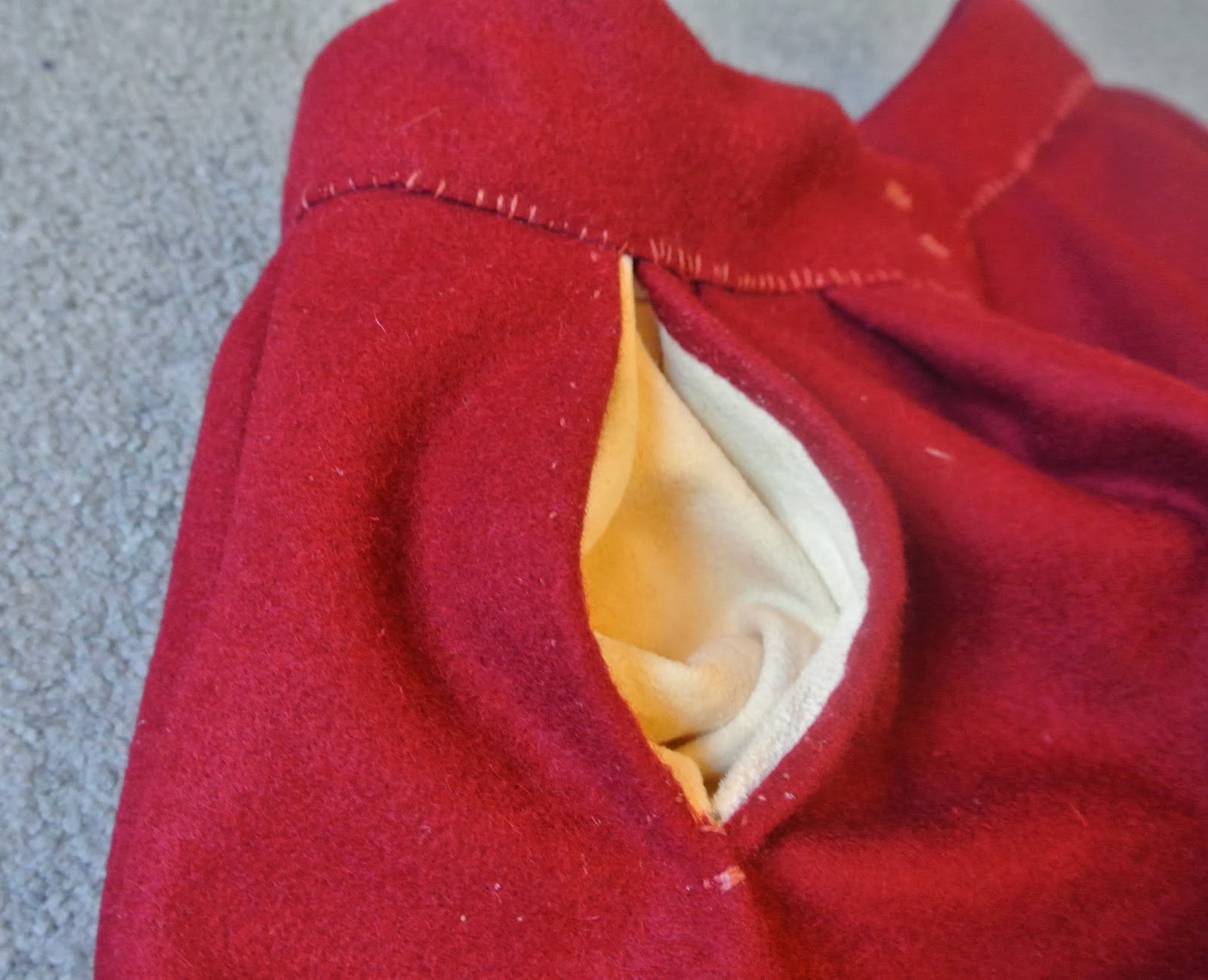 Using the same method that I used for the collar of the soldier's coat, the waistband is just a length of folded cloth sewn directly to the gathered breeches. The lower edge of the waistband is the cut edge, there is no need to turn it under as it won't fray and will be subject to no wear. I used the same method for the lower leg bands. I decided against buttons closure at the top, mainly for practicality as my pikeman son seems to be able to lose buttons with regularity and I thought a leather tie through eyelets would work much better for him. Plus the V&A breeches were fitted with eyelets on both sides of the waistband. See photos below. 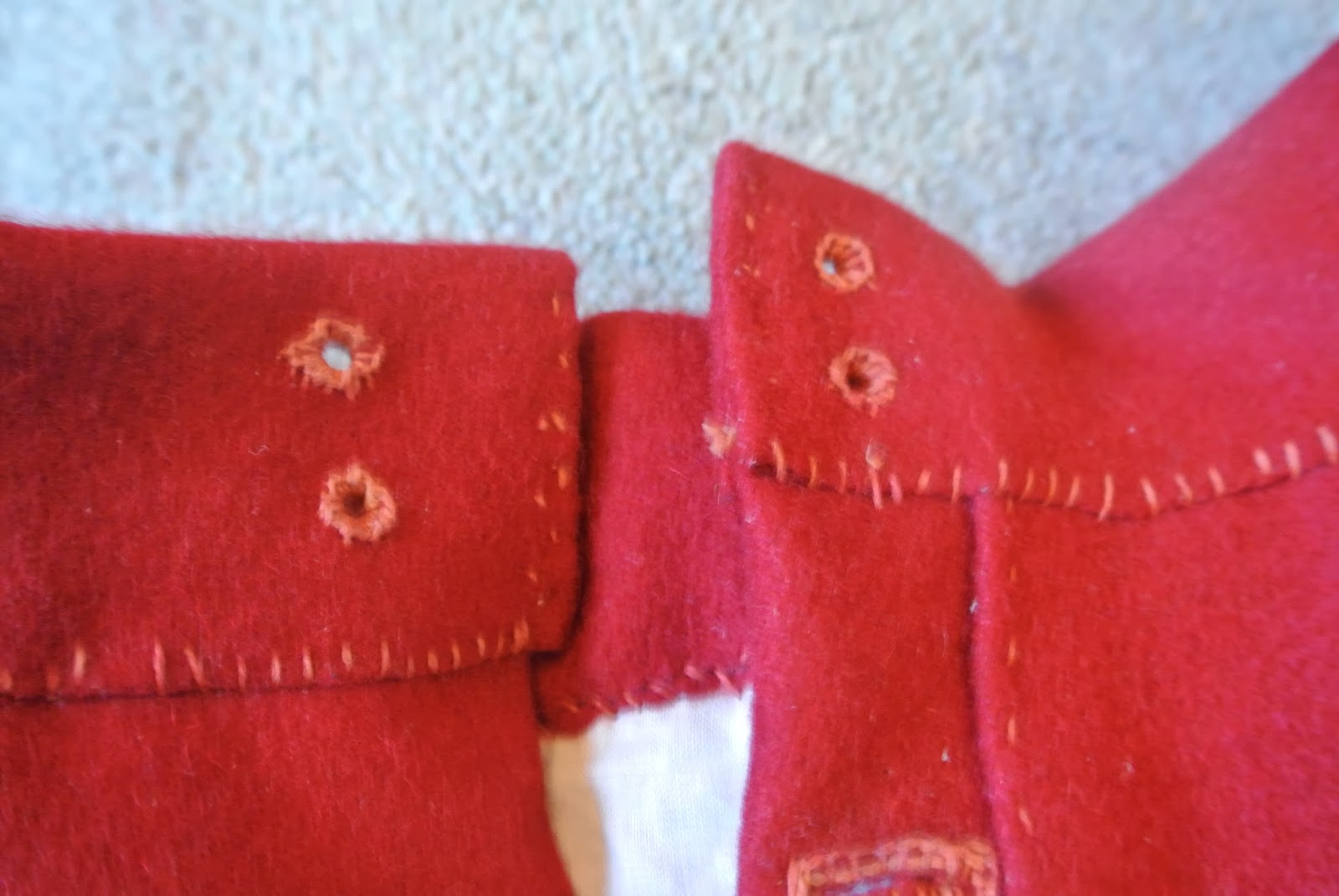 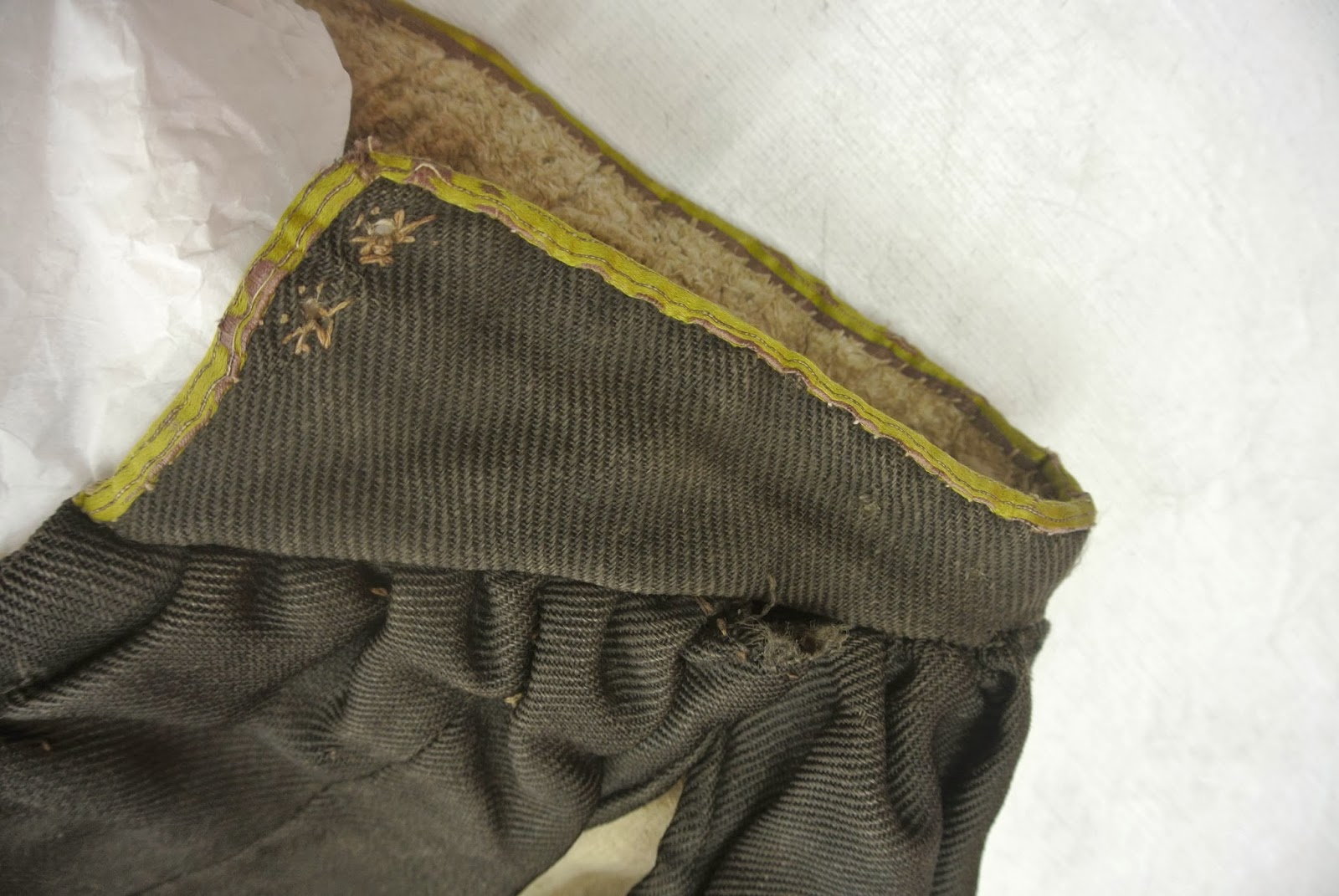 The fly (or codpiece) on the original breeches was just a folded strip sewn straight on to the front opening. It seemed crude to me, (in fact the original breeches are quite crudely put together in places), but as there is historical precedent, why not do the same for mine. I was tempted just to use a single layer of the broadcloth, but I got cold feet at the last moment and folded it once before sewing it on. My buttons are the same pewter ones I used for the coat. The original has some rather nice worked ones over wooden cores. 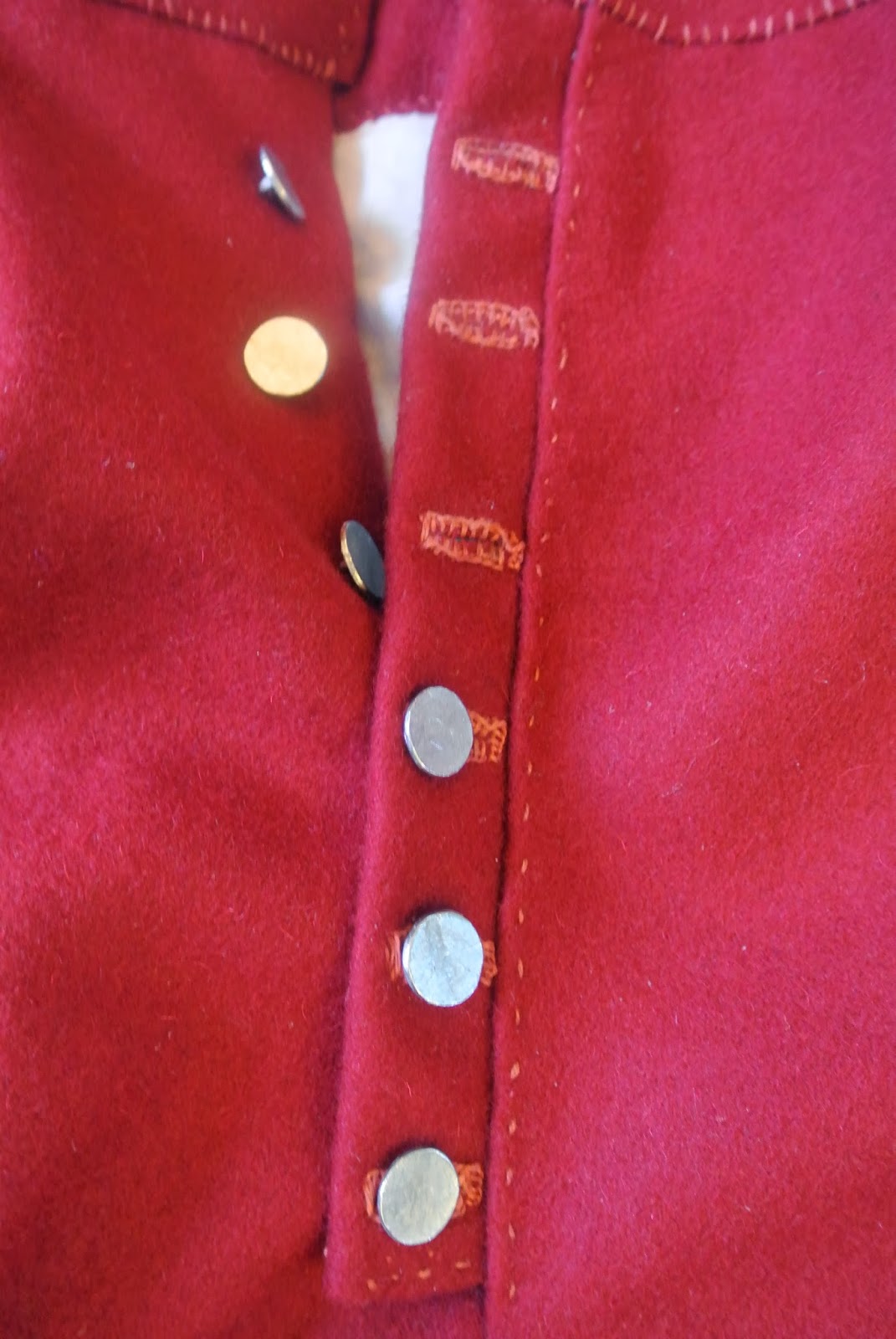 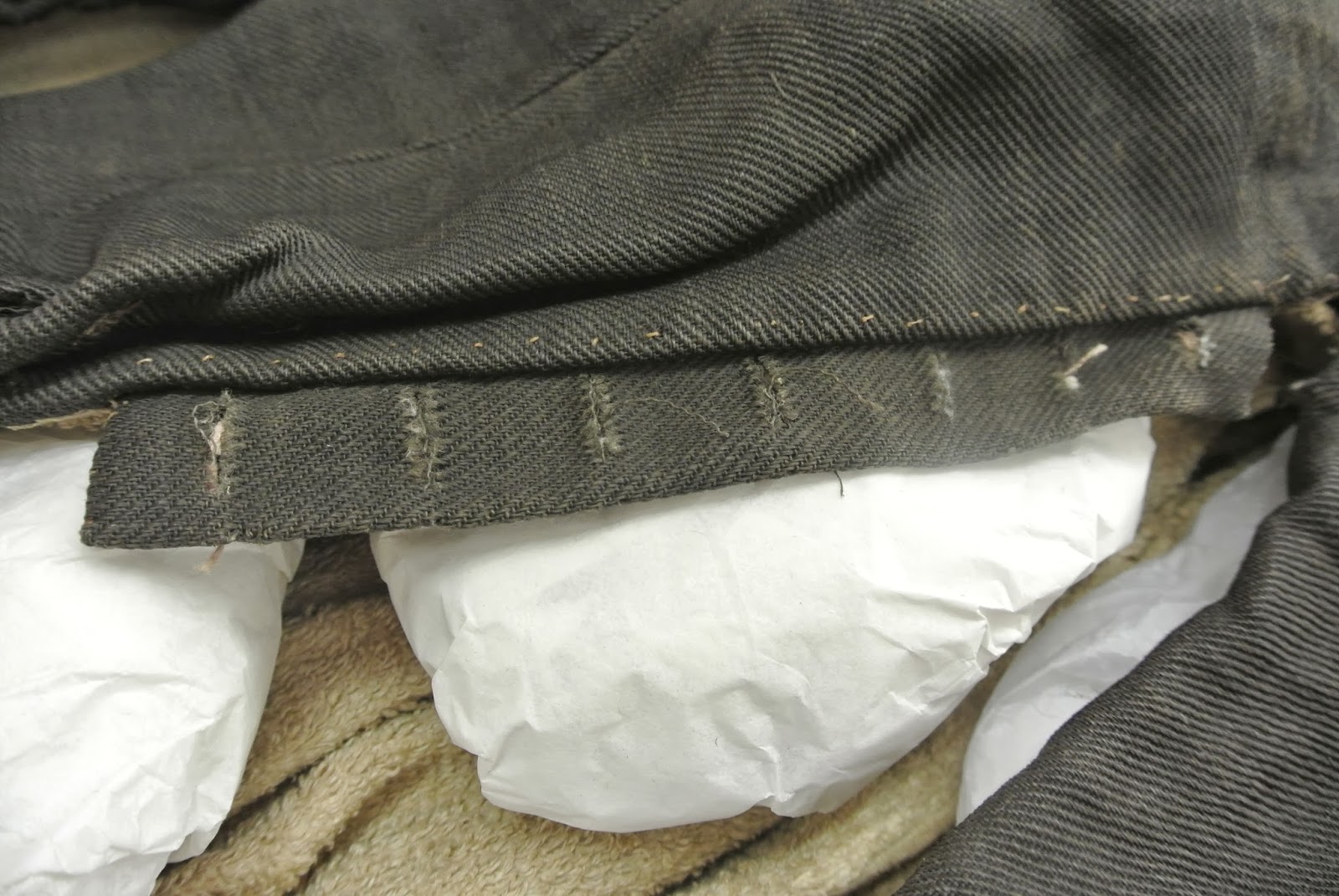 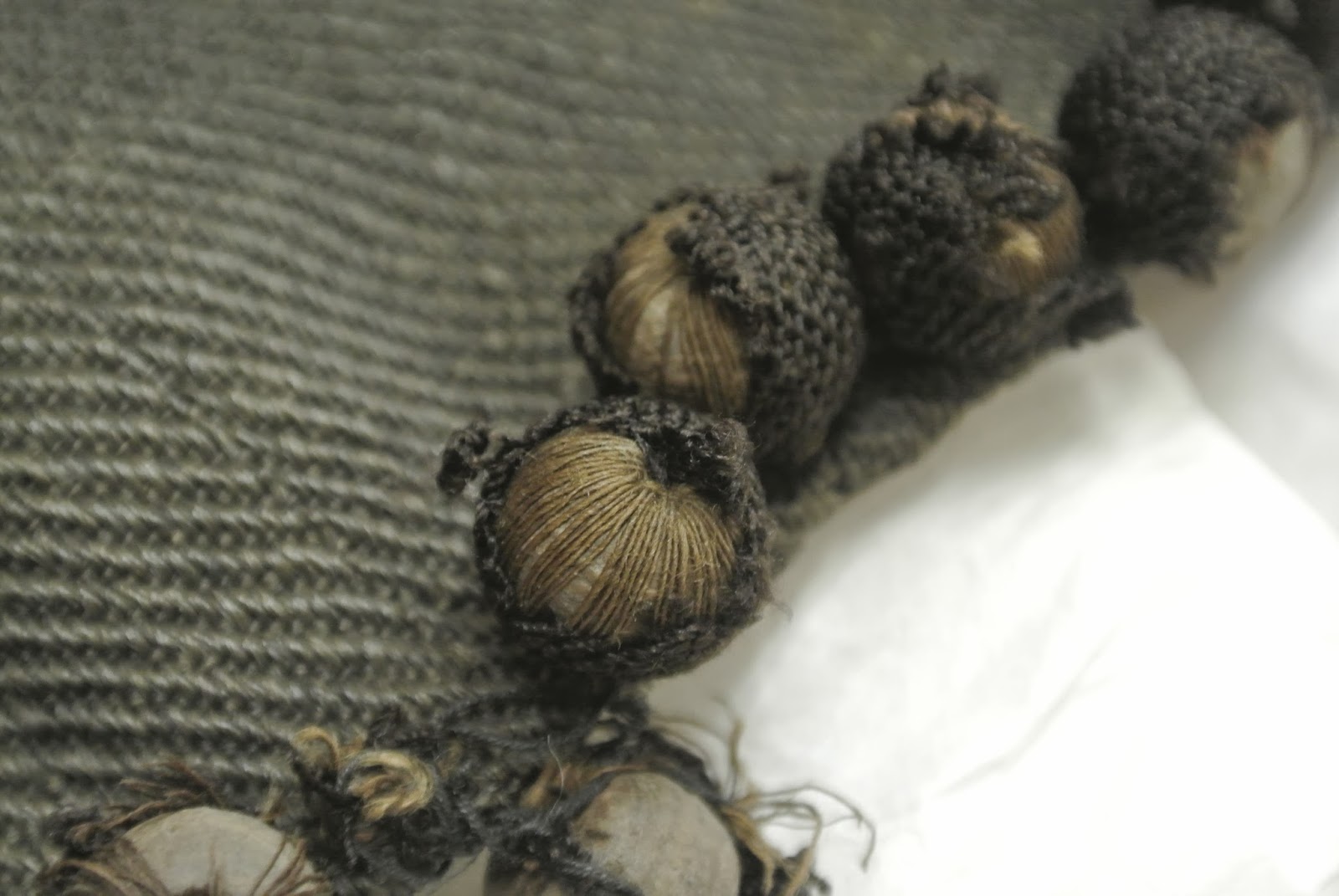 Nothing earth shattering here, just a few observations from having looked at original pieces of clothing. From a distance you probably won't be able to tell a pair of my breeches from anyone else's. however I have learned more from making this pair than any other pair of breeches up to now. The serge suit in the V&A was an inspiration, almost more than the posh doublets I've seen. I could never match the embroidery or buttonholes on the high class stuff. Looking at the Maldon Coat and this example made me think, "yes, I could do that."