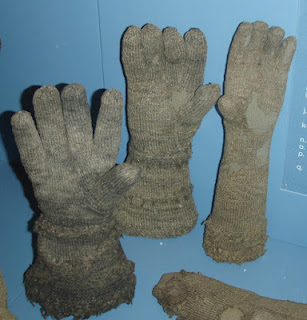 Since the weather has been so cold recently I’ve been thinking about how folk kept their fingers warm in the 17th century. Although it wasn’t actually as cold during the 1640s as it got later in the century, there were cold snaps and times when it rained incessantly. However, while there are many surviving pairs of leather gauntlets from the 1640s,there is very little evidence of woollen ones.
It may be that gloves weren’t worn as much as we might think. Outdoor workers often toughen up their hands rather than opt for protection, which can get in the way and our forebears were hardier than we might believe. However several examples of woollen hand protectors have been found in excavations and are displayed in museums, notably in the Nationalmuseet in Copenhagen. There is little from our period in Britain, but gloves and mittens have turned up from all across Northern Europe in the seventeenth century.
Considerable research activity in historical knitting groups has taken place recently and some interesting finds have turned up, mainly on the continent. It is becoming clear that woollen gloves and mittens were worn by the less well off during our period.  Fine leather gloves and embroidered gauntlets were more often the preserve of the upper echelons, although leather mittens may have been used for protection, perhaps when hedge laying or performing similar tasks that involve working with thorns or sharp edges. 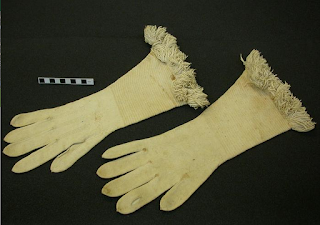 Knitted gloves with four fingers and a thumb have turned up in datable finds from the mid 16th up to the mid 17th century in Iceland, Sweden, Denmark and Germany as well as written references of gloves being exported from England to Europe. The Hereford Museum has a pair of knitted cotton ones from 1660.  There are slits in the fingers and thumb to make coin counting easier. Thanks to Herefordshire Heritage Services, Hereford Museum and Art Gallery for permission to use this image.
There is also a surviving pair of woollen ones from Britain, found in an excavation on the Shetland Islands and are associated with a man whose burial can be dated by coins found in his purse to 1694 or later. 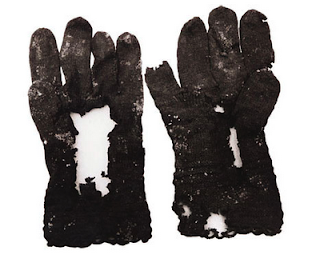 This pair were unearthed in a recent excavation in Luneburg in Germany and has been dated to the first half of the 1600s from shards of pottery found with them. The researchers made the assumption that the gloves belonged to a woman because of the size. They are knitted from wool in the round. 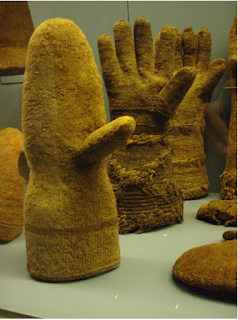 This case from the Museum in Copenhagen has several excellent examples from Northern Europe from the mid seventeenth century. 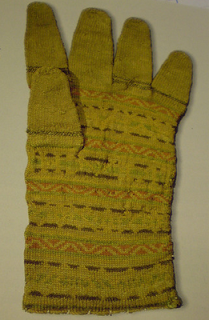 This glove is from Upsala, Sweden in the sixteenth century and by tradition it was worn by Captain Sten Svantesson Sture when he died in a battle 1565, against the Danish. The words Frevchen Sofia are worked in knitting across the palm.  The Stures kept this glove for many years in a vault along with other garments of  family significance .

One style of knitted mitten has two thumbs on opposite sides of the hand. They are heavily fulled and are associated with mariners, especially fishermen. Even today Icelandic fishermen wear similar mittens. Fulling is the term for when knitted woollen items are deliberately washed and agitated in order to make the fibres shrink a little and mesh together more firmly. It is easy to slip a hand into this form of mitten and always find a thumbhole. Alternatively, and much as in modern examples, the second thumb may have been used as a back up in the event of wearing through the first. The extremely long hand part above the thumbs could have acted as extra warming, with an air pocket for insulation.
Fred Hocker of the Wasa museum in Stockholm, also an experienced sailor has a theory:
“The excessive length of these mittens may be related to a similar practice among Grand Banks fishermen, who did a lot of winter rowing on the fishing grounds. Their mittens were made similarly long, and the extra length was folded over to provide a second layer on the palm, so that even if it wore through, their hands were still insulated.”
This two-thumbed style of mitt is still in use today in the far Northern countries, often made of leather. Single-thumbed leather mittens were found on the Swedish ship Wasa that sank just outside Stockholm in 1628. Interestingly they were provided with woollen liners made in a technique known as naalbinding, a possibly even more ancient way of making fabric from yarn than knitting, using one needle rather than two.
Mittens may have been connected with various craft activities, though currently we have no knowledge of who actually wore them. All the examples in museums have been heavily fulled and have long wide gauntlet type wrists, often decorated with garter stitch or thrumming. Sailors mittens as we have seen can be double-thumbed whilst mittens for general wear have just a single thumb. A knitted one-thumbed, heavily fulled mitt may be the answer for a pikeman with frozen fingers. They might even be waterproof. 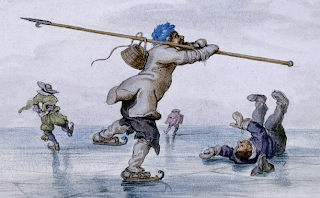 In this picture by Dutch artist Adriaen van de Venne, painted around 1626, the skating peasants can be seen wearing single-thumbed mittens tied at the wrist for protection from the cold. 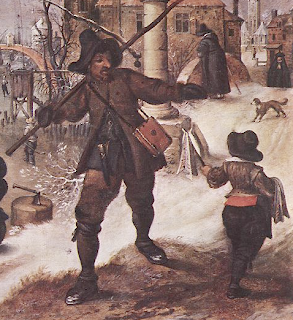 This guy in a detail from a picture entitled January by another Dutch artist Sebastiaan Vrancx is also wearing practical mittens. All gloves of this period were knitted as a whole, like a sock, rather than as a flat piece sewn together to make the hand. The stitches would be worked in a circle, producing the round shape of the body of the glove as the knitter worked. In this way stocking stitch is produced if you just keep going with plain stitch. If you are knitting flat, you have to alternate plain and purl with each row. In the round when you insert rows of purl, you produce a kind of garter stitch decoration. This can be seen on some period gloves, see above. 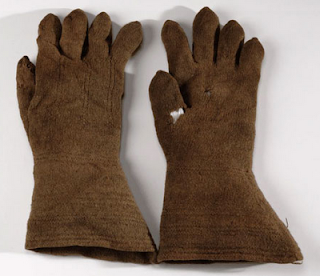 There is one style of knitted glove from Britain, which just may be authentic for the 1640s, but there is no direct evidence. The gloves found with the body in a peat bog in Gunnister, Shetland are dateable to the 1694 at the earliest, but the clothes found with him were old, well worn and the gloves may have come from a long traditional pattern. They are of a similar construction to the earlier examples we have seen, knitted in the round and fulled.
All of these gloves can be knitted using basic techniques. Hopefully before too long patterns for making the gloves will be available for general use. They are in the development stage at the time of writing.
Grateful thanks for all the help in writing this article, to those in the 1640 textiles group, notably Laura and Malcolm. Thanks also to Kat and Kate C (gravity_tester @attdotnet) and the Nationalmuseet for permission to use some of the pictures shown
Posted by The Vicar at 00:25