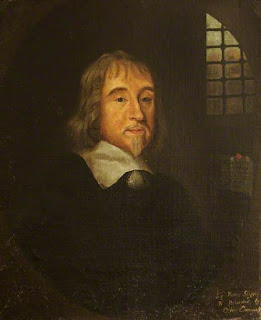 Some recent googling for costume information turned up a shirt that has hung in the Knaresborough Castle museum in Yorkshire for many years. This is a plain linen shirt and is reputed to have been worn by Sir Henry (or Harry) Slingsby (left) on the day of his execution at the Tower of London, 8th June 1658. He was beheaded and his friends brought his body back to Knaresborough, for burial at the parish church. A simple marble slab, said to have come from St Robert's Priory in Knaresborough, covered his tomb. Somehow his shirt was removed and kept, presumably as a relic as it is just a basic linen man's shirt.

At first sight this seemed too good to be true, in this country, plain shirts from this period just don’t exist any more do they? So I asked around all the people I know who are interested if they knew anything about this shirt.  We drew a blank, although a contact on Facebook seemed to have seen it several years age and someone else might have some photos of it hidden away in their loft. The general consensus was that this was probably a modern copy, especially as the only photos showed the shirt on a clothes hanger, not the sort of treatment expected of such a rare exhibit. 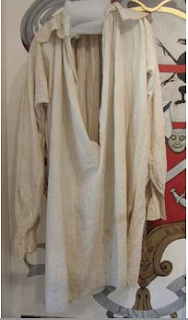 I was aware that Susan North of the V&A museum, and editor of the estimable work Seventeenth Century Women's Dress Patterns (Vol 1) is on a sabbatical studying linen from  past centuries so I mailed her via a mutual friend to see if she had looked at Sir Henry’s shirt. To my surprise, Susan had not even heard of it and set off to have a look.
These are Susan’s initial findings, (PoF4 refers to Patterns of Fashion 4 by Janet Arnold):

“I went to Harrogate (shirt is at the Mercer Art Gallery before it goes back on display in April at Knaresborough) to have a look at it and I can confirm that Slingsby's shirt is mid seventeenth century.  I took PoF4 with me for comparision, and it is very close, although not exactly the same, as #15, as I mention below.
.
I took a pattern and some photographs, which because the flash was turned off, and taken under ambient light conditions, are not great.

It is absolute right on for the 1650s, and correlates very well with the Swedish shirt of Claes Bielkenstierna, 1659 in PoF4 (#15).

And like the Swedish shirt, it seems (short of forensic testing) pretty evident that some poor soul died in it!  I had an intense but gruesome conversation with the curator about the possible 'aftermath' to Slingsby's execution.

It is unusual that it has a darted band and cuffs attached to the collar and wristbands respectively.  In other 17th c. examples, this usually means that the band & cuffs have been added later (see Tina Levey's article in Costume vol.44, 2010, pp.28-36).  But having looked at it, I am absolutely sure these are part of the original construction - linens have the same thread count and the band & cuffs are sewn into the collar & wristbands, not just whipped on.  I was discussing this with Jenny Tiramani and she says there are some like this on the Westminster Effigies, but these appear not to have been photographed (or at least not published) and are now back on display underneath other clothes (argh!).

There are the two 'fancy' mid-17th c. shirts in V&A & MoL, but this is the only plain (and I think more typical) example I've found - and a great find.”

I’m hoping eventually to see some decent images and Susan is putting together a pattern, which with permission from the Museum may be available sometime soon. In the meantime, here's a rather gruesome image of that June morning in 1658. 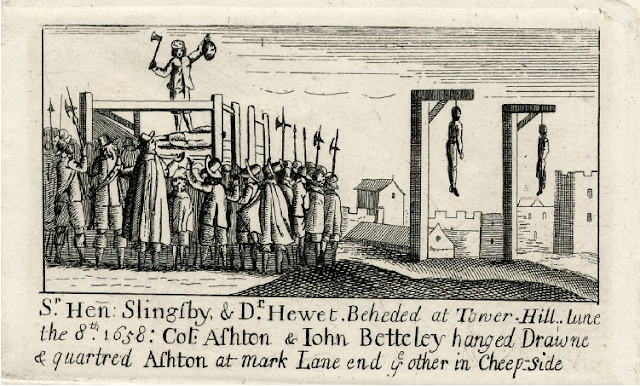