Thanks to Chris Thomas for the bulk of the text here. I've just added some pictures.

17th century buttons were not pierced with two or four holes like those found now. Instead they had a shank on the back of the button, and the single attachment hole passed through that. This image courtesy of the Portable Antiquities Scheme.

Metal buttons were common, often made from lead, pewter tin or alloys of the same. These were usually cast, and the shank could be formed as one piece with the button, or could be in the form of a twist of copper alloy or iron wire set into the casting. Metal buttons could also be made from copper alloy, either cast as above, or in the case of flat buttons, punched from sheet with a loop soldered on the back.  Buttons could also be made from wood, bone etc, but these styles were also shanked not pierced. Upper class buttons could be in silver, gold, or precious stones.

Another style of buttons used a core, often of wood, covered in a wrapping of threads. The threads also formed an attachment shank. They could be fairly plain and simple, or use expensive silk or silver and gold thread.
Cloth buttons were also common: formed from scraps of cloth, or a wooden core, wrapped in a piece of cloth, these also had a shank formed by binding and stitching. 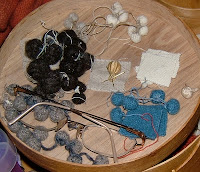 Some repro buttons here in a modern workbox, hence the specs. There is a selection of cloth and thread covered ones here, by Gilly Morley, photo by Tom Aldwinckle

Here, again by Gilly is a row of cloth covered buttons on a soldiers brand new, bright blue coat. Photo by Tom again.

On modern clothes buttons are normally sewn to the face of a garment. Although this style of attachment was used in the 1640s there were other methods. Buttons, especially those with long shanks, could be pushed through the cloth (sometimes between the threads, sometimes through a stitched eyelet) and secured by a cord or thong running through all the shanks at the back. Buttons could also be sewn into the edge of the garment by pushing the shank between the outer fabric and the lining. They could then be thonged or sewn in place.
In the 17th century the fashion was for large quantities of usually small buttons. On fashionable garments the buttons could be very close together, frequently almost touching. Simpler garments used fewer buttons but in general it is true that we generally use too few, too large buttons on our garments.
Things to avoid:

Plastic Buttons.
These are clearly not correct: plenty of authentic buttons are available and are frequently cheaper than buying modern buttons.

Wooden Beads.
They were not used as buttons in our period, although they could form the core of thread buttons or cloth buttons.

Pierced Buttons.
Period buttons always seem to have some form of shank.

Wooden or other buttons which are very shiny, non native woods etc.
Wooden buttons would probably be small scale rural production. As such they would not be highly finished or use exotic woods.  Ordinary grade metal buttons would not have a modern machine polished high gloss finish.
Posted by The Vicar at 10:17