You Can Leave Your Hat On....Maybe 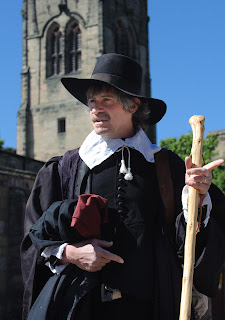 This is not really an article about clothing, rather a piece relating to customs. There has been for a long time in reenactment circles a discussion about hats and whether they were worn or not in the 17th century in church. It’s accepted that as hats were generally worn indoors in these times that they would also have been worn in church. We do know that the removal or doffing of a hat could be used to show respect to your superior, and by inference perhaps this should happen during church services but I’ve not seen any real proof.

I have been aware for a while however of a passage in a booklet produced for the King’s Army in Oxford 1645; Injunctions of the Garrison of Oxford in Order to Religion published by order of the King in 1645 to govern the morals of an army that had recently had a large addtion from Wales. This may or may not have a bearing. Injunction number nine says: 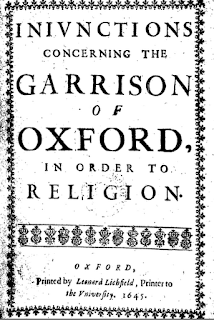 "That all Officers and Souldiers demeane themselves reverently in the time of Divine Service and Sermon, sitting uncovered, and using such Gestures and Postures, as by the Rubrick in the Book of Common Prayer, and by the Canons are enjoyned"

The passage in the bible that was quoted in the seventeenth century to back up the removal of hats is I Corinthians 11.4:

"Every man praying or prophesying, having his head covered, dishonoureth his head" 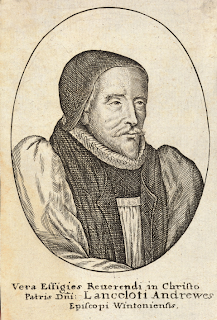 Lancelot Andrewes in The pattern of Catechistical Doctrine at Large, published posthumously in 1650 said of this matter:

Lastly……….that they be for decency. They must be such as make for the decent service of God. And therefore it is, that the Apostle inveighed against covering  of the head and face in religious exercises. It was an uncomely and undecent thing for men to be covered, or women  uncovered in the Church.
So then, as servants are to be uncovered in their master’s service, so are we to be in Gods: and therefore Saint Paul (in the place before cited) tells  us, that it is a shame for a man to have his head covered at that time. That's the first signe.

Although Andrewes was Bishop of Winchester and establishment, his leanings were towards the more godly, puritan side so it may be assumed that most church services would have consisted of men removing their hats and women keeping them on.

In ‘A learned Discourse of Ceremonies Retained and Used in Christian Churches’, Andrewes goes on to say:

“As our Ministers are bare-headed in the Saying of Service, so generally was it used amongst the Heathen Priests.”

So we have the picture that in the conformist churches that all male celebrants, priest and congregation would remove headgear whilst the women kept theirs on.

However there was another side to the argument. The more independently minded saw the removal of hats as part of the innovations to the church that they didn’t like. In A complaint to the House of Commons, published anonymously in 1643, the author says:

“The bringing in of Innovations into the Church hath bred great distraction amongst us; which first began when father Leader came from the Pope, then the Bishops began to erect Altars, and take away the Communion tables, to force all to kneel at the Sacrament, to be all  uncovered during all the time of reading the service, to stand up at the reading of the Gospell, to bow at the name of Iesus”

Furthermore, Robert Baillie in ‘A Dissuasive From the Errours of the Time’ 1645 comments on what he saw in Arnhem:

It must be for the convenient hearing of the word that congregations were expected to listen uncovered. All those big brims getting in the way must have made it tricky to concentrate on a long sermon.

John Taylor the London pamphleteer and staunch royalist says in A Cluster of Coxcombes:

“Some are so farre blinded, that they hold all manners, Decencie, Order, comely Gesture, or Ceremony, as standing at the Belefe, kneeling at the Lords Prayer, or at the receiving of the Sacrament, Bowing at the Name of Iesus, or Reverence in being  uncovered at the entring into the house of God, all these are accounted Superstition, Idolatry, and Popery: but to come to the Church boldly or rudely as into a Taverne, an Ale-house or stable” 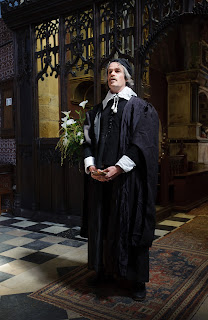 “….superstition properly is an over-strict religious insisting upon the doing or not doing of that which in it self is but indifferent; his own scrupulousnesse not to kneel, not to bow, not to stand up, not to be  uncovered, not to answer, &c. according to the use of the Church, is not onely disobedience, but very superstition it self, placing Religion in that wherein there is no Religion to be placed”
from A Protestants account of his orthodox holding in matters of religion 1642

John Donne however in a sermon delivered in 1627 at the Earl of Bridgewater’s house in London had this to say:

“Every Preacher will look, and justly, to have the Congregation  uncovered at the reading of his Text: and is not the reading of the Lesson, at time of Prayer, the same Word of the same God, to be received with the same reverence? The service of God is one entire thing; and though we celebrate some parts with more, or with lesse reverence, some kneeling, some standing, yet if we afford it no reverence, we make that no part of Gods service.”

He obviously thought it should be the other way around.

This was the thinking in puritan New England, John Cotton pastor of Boston wrote in The true constitution of a particular visible church, proved by Scripture 1642:

“Quest. How is the publike worship of God to bee ordered, and administred in the Church?
Answ. All the Members of the Church being met to|gether as one man  in the sight of God  are to joyne together in holy duties with one accord  the men with their heads  uncovered the women covered” 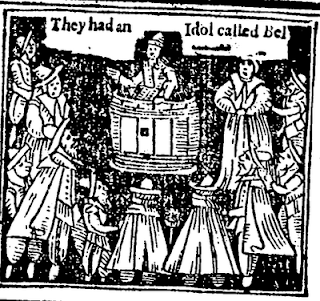 Even the most independently minded men would remove their hats for prayer, though this passage from Thomas Edwards’ A Relation of some remarkeable Passa|ges of divers Sectaries, and of the Contents of severall Letters written up here to London, from good hands concrning them from 1646 indicates that during the war even this custom may have broken down:

"On the 25. of October, 1646. John Webb a Lievtenant guarded with his Souldiers, as M. Skinner was preaching in his Church, started up and with a loud voice publiquely interrupted him, cal'd him foole three times, Popish Priest, tub-preacher, bidding him often to come downe out of his tub, saying, he taught lyes to the people: This Webb said, that himselfe was a Minister of Jesus Christ, and cared not for the Ordinance of Parliament, or Synod, for what were they to him, and in this manner he proceeded, troubling M. Skinner and the Congregation till one of the clock, and then in a rage went out of the Church, calling Mr. Skinner black frog of the Revelation, threatning he would preach in the after-noone do what he could; and in the afternoone Web got into the Church before M. Skinner could come (his Souldiers having picked the locks of the Church doore) and took possession of the reading pew, and was there expounding when M. Skinner came in, Mr. Skinner being thus kept out of his seat, went up into his Pulpit, and setting a Psalme, in the singing of it, the said Webb and his souldiers kept on their hats, whereupon M. Skinner intreated them to uncover, considering they were in Gods presence; But Lieutenant Webb cryed out aloud, souldiers and all ye that are on my side keep on your hats, which was done accordingly. The Psalme being ended, Mr. Skinner desired them all to joyne with him in prayer  uncovered, but the said Webb and the other Independents would not uncover, whereupon M. Skinner being over the said Webbs head, took off his hat gently, desiring him to remember about what a holy duty he was, upon which Webb in a fury cryed out, my souldiers and Constable pull him down, cast him in hold till to morrow, and then bring him before me, at which command two fellowes went to pull him down with violence, but some of the neighbours laying hold on them whilst they were drawing their swords, by Gods  good providence this old Minister of 70. yeares of age with much adoe escaped their hands, and after his departure Webb preached."

So the thrust of my argument is that for most conformist church services it was expected for all men, priest and congregation to take part uncovered, ie. having removed all headgear whilst all women present should remain covered. For those more independently minded male worshippers it was a matter of conscience to keep their hats on whilst receiving the sacrament, though some preachers may have insisted on hats being removed to hear the sermon, probably to help the concentration rather than for any reasons of respect.

I’d like to give the last word however to Katherine Chidley, later in the period to become a prominent in the Leveller movement who in The Ivstification of the Independant Chvrches of Christ 1641 gives a strangely balanced view for the times:

“The next thing is, about sitting with hats on to breake bread?