Early Doublet in The Museum of London 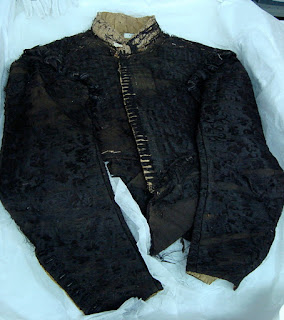 Recently I've been visiting the costume department in the Museum of London and have been lucky enough to look closely at a doublet in their collection. It's a bit earlier than our period, but most of the construction techniques in the garment were still being used in the 1640s. Also, because the doublet is in such bad repair, a lot of the internal "workings" are visible which make this such an interesting study. I'm afraid some of this is a bit dry, but I'm reproducing my full report here with a lot of close up shots that you may find interesting.

Thanks to Hilary Davidson at the Museum for help, advice and permission to use the photos.


Catalogue entry:
A7577. 1601-1626; Silk; L  515mm; W (shoulders) 510mm; L (sleeve at
back) 660mm. Doublet, black silk cut velvet, time of Shakespeare, worn
by a member of the Isham family (and father of wearer of A7576).
Hooks on the inside waistband date it to the early C17 as before then
eyelets were used to attach points of the hose.
[see also 33.182]
Introduction
The doublet was worn by a member of the Isham (pron. eye-sham) family, a prominent Northamptonshire family. John Isham (1582-1651) was made 1st Baronet Lamport in 1627 and was succeeded by his son Justinian (1610-1675). Either could have been the wearer of this doublet, which is well made of expensive materials, at least those on show on the outside of the garment and of the fashion current for 1625-30. The style is very similar (although without the braid) to that worn by William Herbert 3rd Earl of Pembroke in an undated portrait by Daniel Mytens (Herbert died 1630) and quite similar to the doublet worn by King Charles in his Mytens portrait of 1629. Although Charles’ doublet has slashed sleeves and 2 visible front slashes on the body, which this garment doesn’t have, the waist is of a similar position to this doublet and the tabs of a comparable size. After this time, the waist moved up the body and the tabs became larger. Charles’ also has ribbon bows and points around the waist in the position indicated by the eyelet holes on the front tabs of this doublet.
Stylistically the doublet is also closely related to the Cotton Doublet in the V&A which is dated c1618, although the V&A example has no metal eyelets, these could have been added to the doublet at a later date. I feel that this garment in style and construction is probably most likely to have been made at the latter end of the date given in the catalogue entry.
Description 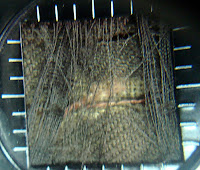 The doublet is much degraded but as such shows a wealth of constructional detail that would otherwise be hidden in a finished garment. The body seems to be made of a black silk outer layer, covering a darkish brown melton wool twill fabric (1:1 or 2:1 weave). 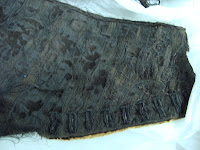 Much of the black silk has now gone, the remainder is held in several places by some crude over-sewing (couching) in a brown thread. Where the silk is best preserved, on the lower back for instance and the sleeve, a fine pattern of leaves and scrolls is visible. 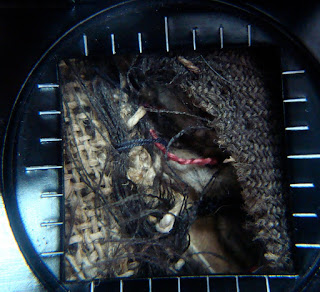 This is over a coarse linen interlining which is tacked to the wool using large running stitches in undyed linen thread. Inside the interlining is a layer of possibly wool shoddy/carded wool fleece padding which is covered and quilted by what was originally pink silk taffeta. Some of the pink thread used in the quilting is visible through the threadbare patches and where the collar is detatched from the body. 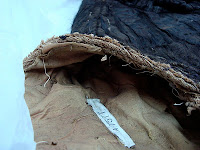 The collar appears to be made of four layers of thick canvas, one piece folded and sandwiched between two others (as 2 edges and a fold are visible), basted together with undyed linen thread, covered with the same black silk as the body and lined with crimson silk. The lining is still present, though the black silk has almost completely disappeared from the top layer of the collar. There would appear to have been no wool beneath the silk on the collar. There are 3 buttons (see below) on the left hand side of the collar. These would have located into 3 thread worked loops on the right.

The front of the doublet is closed with buttons and buttonholes. 34 worked buttonholes run down the left side to match the buttons on the right. The buttonholes are worked in black thread on the edge of the doublet with a bar on the inner edge and appear to be on a flap formed above the quilted inner. This makes it easier to do up the buttons whilst ensuring the quilting meets in the middle and easier to work the holes with thread. The buttons appear to be thread wrapped with black thread and then partially covered with silver gilt thread in a basket weave pattern.
Some of the buttons appear to be later reproductions. The sequence of buttons is as follows, from the top down, O represents originals, R replacements and G stands for a gap:
OOLLOOOOOOOGOGOGGGGOOOOOGGOOGOGGGRR 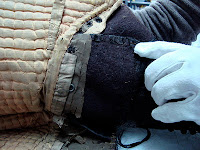 Two small flaps, possibly in linen lining canvas, covered with the pink silk are attached inside the lining, low down, level with the highest point of the waistband. They each have a single worked eyelet hole and if tied with a lace before buttoning, would take the tension caused by a larger waistline, which might cause the lower buttons to pop open.

The top of the armhole sleeves are capped with wings, though they are slashed in several places, or maybe made from several smaller finished tabs, edged with silver gilt braid, the lines of braid running away from the seam. The sleeves are of a 2-piece construction and are open at the lower seam to a length of six inches, fastened with 9 buttons and buttonholes. The internal workings of the sleeve buttonholes are not as neat as the visible stitches. 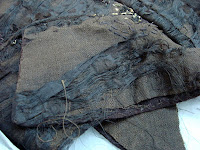 At the lower edge of the garment are a number of square, or nearly square (10-11?) tabs. These run all the way around the waist and are constructed of a different kind of brown wool cloth to the body of the doublet. This is a thick felted fabric with no discernable weave and at least two slightly different browns can be seen on separate tabs, suggesting that this fabric was not selected for the doublet but taken from off cuts (cabbage) of previous tailoring jobs, possibly common coats for lower class customers. The tabs were wrapped in the covering silk, although only on the front, as an edge of about 1cm is visible on the reverse side, tacked down with large running stitches. 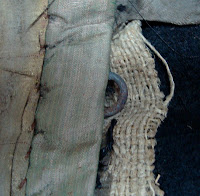 There are scraps of what appear to be a similar silk to that of the lining which indicate that the tabs were originally faced on the inside with silk and beneath that a strip of linen, presumably from the interlining protrudes down about an inch from the waistline. Through the first 2 tabs from the front at least there are worked eyelet holes, 3 on the first tab and beginning from the second tab on each side a strip of silk taffeta, covering a stiffer material, perhaps the same canvas as the collar, with metal eyelets attached runs around the inside of the waistline.This is to attach the doublet to matching hooks on the waist of a pair of breeches. These eyelets where visible are spaced every 2 or 3 inches. The waistline has no loops for a belt which was often the case if a sword was worn with a doublet.
Posted by The Vicar at 05:53