a. The Little Mermaid
b. the Tuborg Brewery
c. The Tivoli Garden,

Copenhagen is also home to a rather special museum, the Danish Nationalmuseet. In one of the galleries there is a selection of 17th century knitwear. The sign indicated that these items came from a excavations in Copenhagen in 1900. Two items from this collection have caught my eye. They seem to be almost untouched examples of 17th century brimmed monmouth caps, the only example of which was originally thought to be in a museum in Russia and to have belonged to Peter the Great. Have a look and see what you think. It is thought that these hats were exported to Europe from 17th century England, so they just might be contemporary for 1640s Civil War England. There's much more in the case, including gloves and mittens, but I'm hoping to hear from the museum first before I add any pictures. Big thanks to Kate for letting me use her pictures.

Here's a description from Poul Grinder Hansen who works in the museum:
The hat in question is on display in our renaissance exhibition together with a number of similar hats, gloves and stockings, all of them finds from the old moats which once encircled Copenhagen.  I know of nine such hats from Copenhagen, five of which are in the National Museum. They are described like this in an exhibitions catalogue from 1988 “Christian IV and Europe”, cat. 848: The hats are of high quality knitting techniques. Knit from above in one piece with the brim, which is double knit and cast off at the edge. Originally the hats have been fulled so that they resembled felt, and perhaps they were dyed. 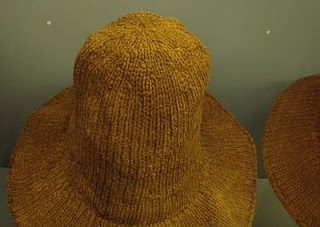 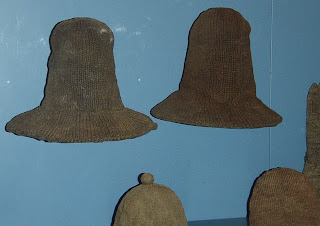 Sally Pointer makes reproductions and sells the patterns for making these hats on her website.
Could the ballad seller on the right be wearing one of these hats? Who knows? It's certainly possible. 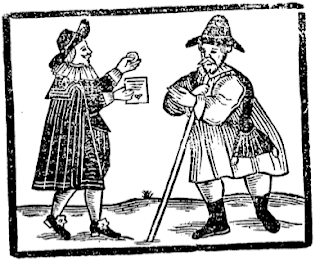